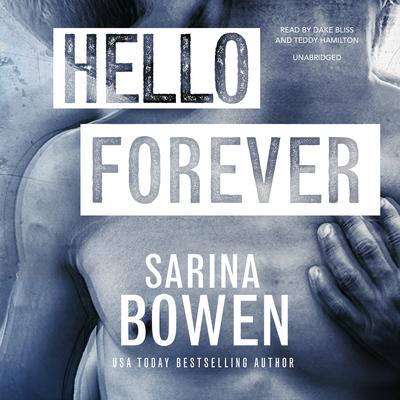 By Sarina Bowen
Read by Dake Bliss  and Teddy Hamilton

When they were only teenagers, Axel and Caxton were caught making out in the woods at church camp. And afterward, Cax had disappeared from all the youth group activities.

Six years later, Axel is astonished to spot his first love’s face in the crowd of a college basketball game he’s watching on television—at a school that has just offered him a job. It’s a thousand miles away, in a tiny rural town. But suddenly he can’t wait to get there.

Cax can’t believe his eyes when Axel appears in the same Massachusetts town where he now lives. And he’s still just as drawn to him as ever. But he can’t let himself go there again, because loving Axel will mean giving up everything else he holds dear.

Both men have so much to lose. But as far as their love is concerned, it’s Hello Forever.

“Sarina Bowen is a fantastically gifted storyteller.” —Lorelei James, New York Times bestselling author
“A master at drawing you in from page one and leaving you aching for more.” —Elle Kennedy, author of The Goal, praise for the author