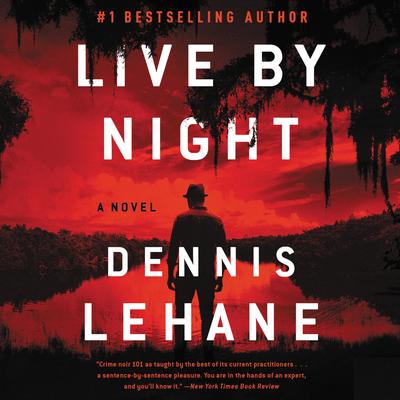 Winner of the 2013 Edgar Allan Poe Award for Best Novel

An Amazon Best Book of the Month, October 2012

From New York Times bestselling author Dennis Lehane comes this epic, unflinching tale of the making and unmaking of a gangster in the Prohibition Era of the Roaring Twenties—now a Warner Bros. movie starring Ben Affleck, Elle Fanning, Zoe Saldana, and Sienna Miller.

Meticulously researched and artfully told, Live by Night is the riveting story of one man’s rise from Boston petty thief to the Gulf Coast’s most successful rum runner, and it proves again that the accolades New York Times bestseller Lehane consistently receives are well deserved. He is indeed, “a master” (Philadelphia Inquirer) whose “true literary forefathers include John Steinbeck as well as Raymond Chandler” (Baltimore Sun). And, “Boy, does he know how to write” (Elmore Leonard).

“[Dennis Lehane] deserves to be included among the most interesting and accomplished American novelists of any genre or category.” —Washington Post Book World

“A rich tale so dramatically realized that it’s HBO-worthy…Live by Night belongs somewhere in a realm where Mario Puzo meets the Bible. It’s a morality tale, but in keeping with the best of those, it’s complex and layered and damnably entertaining, too.” —New York Daily News
“Boy, does Lehane deliver…Lehane, who has lived in the Tampa Bay area off and on for many years, has done his homework on local history…But Live by Night isn’t just a vibrant historical jaunt. Lehane is a past master of suspense and action, and his turn here from characters who solve crimes to those who commit them offers him rich territory…Irresistible storytelling about a compelling, conflicted, and mordantly funny man.” —Tampa Bay Times
“Masterful…Lehane has created a mature, quintessentially American story that will appeal to readers of literary and crime fiction alike.” —Publishers Weekly (starred review)
“Lehane’s novel carves its own unique place in the Prohibition landscape…This is an utterly magnetic novel on every level, a reimagining of the great themes of popular fiction—crime, family, passion, betrayal—set against an exquisitely rendered historical backdrop.” —Booklist (starred review)