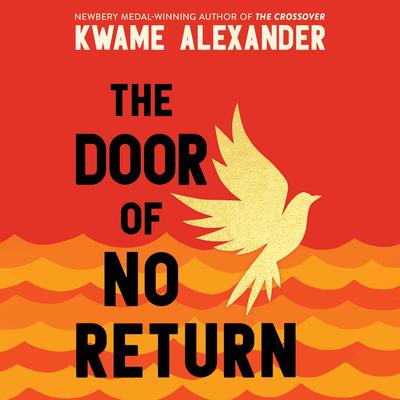 The Door of No Return

From New York Times Bestselling author Kwame Alexander comes the first book in a searing, breathtaking trilogy that tells the story of a boy, a village, and the epic odyssey of an African family.

11-year-old Kofi Offin dreams of water. Its mysterious, immersive quality. The rich, earthy scent of the current. The clearness, its urgent whisper that beckons with promises and secrets…

Kofi has heard the call on the banks of Upper Kwanta, in the village where he lives. He loves these things above all else: his family, the fireside tales of his father’s father, a girl named Ama, and, of course, swimming. Some say he moves like a minnow, not just an ordinary boy so he’s hoping to finally prove himself in front of Ama and his friends in a swimming contest against his older, stronger cousin.

But before this can take place, a festival comes to the villages of Upper and Lower Kwanta and Kofi’s brother is chosen to represent Upper Kwanta in the wrestling contest. Encircled by cheering spectators and sounding drums, the two wrestlers from different villages kneel, ready to fight.

You are only fine, until you are not.

The match is over before it has barely begun, when the unthinkable–a sudden death–occurs…

The river does not care how grown you are.

As his world turns upside down, Kofi soon ends up in a fight for his life. What happens next will send him on a harrowing journey across land and sea, and away from everything he loves.

Kwame Alexander is a poet, speaker, educator, and bestselling author of more than a dozen books, including The Crossover, which received the 2015 John Newbery Medal for the Most Distinguished Contribution to American Literature for Children. His other works include the novels He Said, She Said and Booked, as well as his nonfiction debut, The Playbook: 52 Rules to Aim, Shoot, and Score in This Game Called Life. He is the cofounder of LEAP for Ghana, an international literacy program.