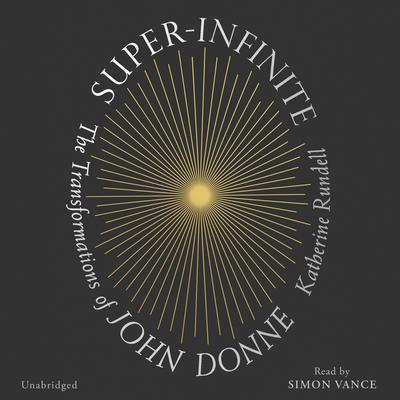 Super-Infinite: The Transformations of John Donne

From standout scholar Katherine Rundell, Super-Infinite presents a sparkling and very modern biography of John Donne: the poet of love, sex, and death.

In his myriad lives he was a scholar of law, a sea adventurer, a priest, an MP—and perhaps the greatest love poet in the history of the English language. Along the way he converted from Catholicism to Protestantism, was imprisoned for marrying a sixteen-year old girl without her father’s consent, struggled to feed a family of ten children, and was often ill and in pain. He was a man who suffered from black surges of misery, yet expressed in his verse many breathtaking impressions of electric joy and love.

“Katherine Rundell makes Donne come alive as a remarkable and extraordinary and almost boundless human being. His life was one of despair and joy, the sacred and the profane, deep love and pain, and this book is filled with such infectious passion and fascinating detail that it shines like its subject. A triumph.” —Matt Haig, New York Times bestselling author
“What a delightful book Super-Infinite is: companionable, astute, intimate in tone and clear-eyed in judgment, it brings Donne and his milieu to glorious life. I loved it.” —Nick Laird, author of Feel Free

Katherine Rundell is a Fellow of All Souls College, Oxford. Her bestselling books for children have been translated into more than thirty languages and have won multiple awards. Rundell is also the author of a book for adults, Why You Should Read Children’s Books, Even Though You Are So Old and Wise, and writes occasionally for the London Review of Books, the Times Literary Supplement, and the New York Times.