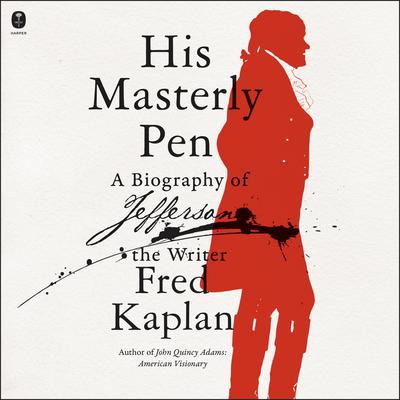 His Masterly Pen: A Biography of Jefferson the Writer

As he did for Abraham Lincoln and John Quincy Adams, award-winning biographer Fred Kaplan offers a fresh, illuminating look at the life of Thomas Jefferson and his contributions as a writer.

In this unique biography, Fred Kaplan emphasizes Thomas Jefferson’s genius with language and his ability to use the power of words to inspire and shape a nation. A man renowned for many talents, writing was one of the major activities of the statemen’s life, though much of his best, most influential writing—with the exception of the letters he wrote up to his death, numbering approximately 100,000—was done by 1789, when Jefferson was just forty-six. All of his works—from his earliest correspondence; his essays and proclamations, including A Summary View of British America, The Declaration of Independence, and Notes on the State of Virginia; his religious and scientific writings; his inaugural addresses; his addresses to Indian nations; and his exchanges with Washington, Madison, Hamilton, John and Abigail Adams, and dear friends such as Maria Cosway—demonstrate his remarkable intelligence, prescient wisdom, and literary flair and reveal the man in all his complex and controversial brilliance.

In His Masterly Pen, readers will find a new appreciation of Jefferson as a whole, of his strengths and weaknesses, and particularly of the degree to which his writing skills—which James Madison admired as “the shining traces of his pen”—are key to his personality and public career. Though Jefferson could wield his pen with unrivaled power, he was also a master of using words to both reveal and conceal from others and himself the complications, the inconsistencies, and the contradictions between his principles and his policies, between his head and his heart, and between his optimistic view of human nature and the realities of his personal situation and the world he lived in.