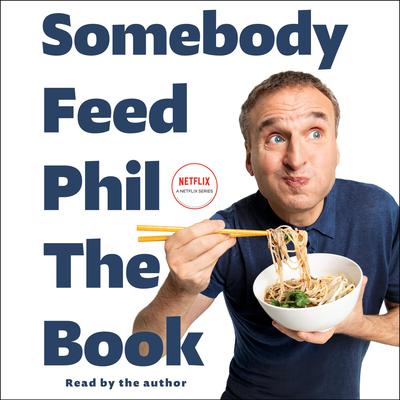 Somebody Feed Phil: The Book: The Official Companion Book with Photos, Stories, and Favorite Recipes from Around the World (A Cookbook)

The ultimate collection of must-have recipes, stories, and behind-the-scenes photos from the beloved Netflix show Somebody Feed Phil.

Phil Rosenthal, host of the beloved Netflix series Somebody Feed Phil, really loves food and learning about global cultures, and he makes sure to bring that passion to every episode of the show. Whether he’s traveling stateside to foodie-favorite cities such as San Francisco or New Orleans or around the world to locations like Saigon, Tel Aviv, Rio de Janeiro, Mexico City, or Marrakesh, Rosenthal includes a healthy dose of humor to every episode—and now to this book.

In Somebody Feed Phil the Book, Rosenthal presents never-before-heard stories from every episode of the first four seasons of the series, along with more than sixty of viewers’ most requested recipes from acclaimed international chefs and local legends alike (including Rosenthal’​s favorite sandwich finds from San Francisco to Tel Aviv), so you can replicate many of the dishes from the show right at home. There are also “scripts” from some of Rosenthal’s video phone calls from the road with his family making this the ultimate companion guide for avid fans of the show as well as armchair travelers and adventurous at-home chefs.

“What could be more delightful than watching Phil travel and eat around the world? Trying the amazing meals ourselves…I can’t wait to dive in.” —Gwyneth Paltrow, American actress and businesswoman
“Wherever I travel, be it a different state, country, or continent, I always call Phil when I need to know where and what to eat. He’s the food guru of the world. You can have that same information, folks! I can’t give you his phone number, but this book is just as good. It’s probably better, because when he’s on the phone he never shuts up.” —Ray Romano, comedian, actor, and screenwriter
“The man has great taste—he’s a true enthusiast and culinary adventurer. And now his favorite global recipes are in one cookbook? Sign me up.” —Norman Lear, Emmy Award-winning television writer and film and television producer