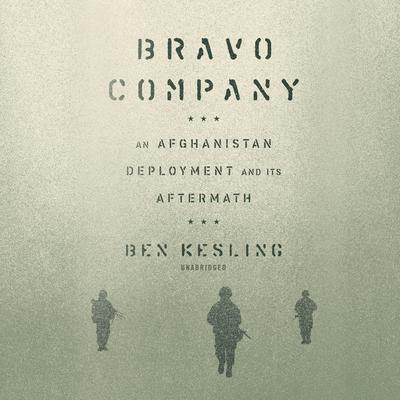 Bravo Company: An Afghanistan Deployment and Its Aftermath

A timely and searing account of the American war in Afghanistan

In Bravo Company, journalist and combat veteran Ben Kesling tells the story of the war in Afghanistan through the eyes of the men of one unit, part of a combat-hardened parachute infantry regiment in the US Army’s 82nd Airborne Division.

A decade ago, the soldiers of Bravo Company deployed to Afghanistan for a tour in Kandahar’s notorious Arghandab Valley. By the time they made it home, three soldiers had been killed in action, a dozen more had lost limbs, and an astonishing half of the company had earned Purple Hearts.

In the decade since, two of the soldiers have died by suicide, more than a dozen have tried, and others admit they’ve considered it. Declared at “extraordinary risk” by the Department of Veterans Affairs, Bravo Company was chosen as test subjects for a new approach to the veteran crisis, focusing less on isolated individuals and more on the group.

Written with an insider’s eye and ear and drawing on extensive interviews and original reporting, Bravo Company follows the men from their initial enlistment and training, through their deployment and a major shift in their mission, and then on to what has happened in the decade since, as they returned to combat in other units or moved on with their lives as civilians, or struggled to.

This is a powerful, insightful, and memorable account of a war that didn’t end for these soldiers just because Bravo Company came home.

“Gut-wrenching…Devastating yet cautiously hopeful, this is an essential study of combat trauma.” —Publishers Weekly (starred review)
“Impossible to put down…A gripping, detailed, nuts-and-bolt account of their ordeal…An outstanding narrative about a single unit’s harrowing experiences.” —Kirkus Reviews (starred review)
“Bravo Company is that rare deep dive into the meaning of war and soldiering…and what happens after you hang up the uniform.” —Booklist
“Captures not only war but the way war puts the complexities and paradoxes of life itself in sharp relief.” —Phil Klay, New York Times bestselling author
“Bravo Company is an honest account of bravery, sacrifice, and what it means to seek redemption…Read this remarkable book.” —Jake Tapper, CNN anchor and New York Times bestselling author
“Masterful…For those who came home, Kesling’s book is a road map of their journey. For those who were lost, this book stands as a memorial.” —Elliot Ackerman, New York Times bestselling author
“War’s long, dark tail emerges in all its terror and thrill here, summoning the old wisdom of the past not even being past. What a great book.” —Matt Gallagher, author of Empire City
“Perfectly captures the true cost of the decades-long war in Afghanistan…For anyone who ever wanted to know about the cost of war, this is the book.” —Ron Nixon, global investigations editor, Associated Press
“The men of Bravo Company are captivating, raw, salty—and above all real. Ben Kesling knows of what he writes and does us a service to bring home their stories of war and the battles afterward.” —Quil Lawrence, NPR correspondent and former bureau chief in Baghdad and Kabul

Ben Kesling is a Midwest correspondent for the Wall Street Journal, where he focuses on domestic security and veterans issues. He has a Master of Divinity degree from Harvard Divinity School, attended the Medill School of Journalism at Northwestern University, and previously served as a Marine Corps infantry officer in Iraq and Afghanistan. He is also a two-day Jeopardy! champion.