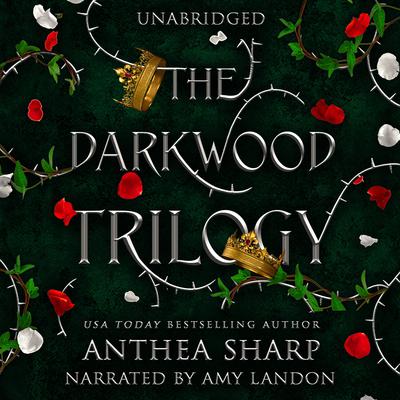 The Darkwood Trilogy: A Complete YA Fairy Tale Fantasy Series

Two sisters. One enchanted forest. And a reckless choice that could destroy kingdoms …

Taken away from her ordinary life, Rose Valrois finds herself in a world full of secrets and forbidden magic. There she meets her new stepsister, the enigmatic Princess Neeve, who will either become her best friend … or her worst enemy.

In the shadows of the magical Darkwood, Rose discovers danger and adventure in her quest for answers about the mysteries surrounding her. When she’s rescued by Thorne, the Dark Elf guardian of the forest, he binds her to the Darkwood and forbids her to speak of its secrets.

But secrets have a way of getting loose, especially when there’s hidden magic involved, and Rose falls deeper into the thorny tangles of her own past. Her sister, Neeve, is concealing dangerous powers of her own, and the two of them are soon entangled in a destiny that will bring them face-to-face on opposite sides of a deadly magical war.

Ultimately, Rose must risk her freedom, her world, and even her truest love to save her sister. Can she bear to make that sacrifice? Does she even have the choice?

Called “A fantastical series” by Publishers Weekly, USA Today bestselling author Anthea Sharp has crafted a lushly written fairy-tale trilogy weaving elements of “Snow-White and Rose-Red” with romance, magic, cozy fantasy, and secrets that that will change the fate of worlds.

“Sharp interweaves welcome allusions to ‘Snow-White and Red-Rose’ and adapts other fairy elements creatively; the world of the Darkwood and its denizens is distinctly drawn in this fantastical series starter.” —Publishers Weekly on White as Frost

Anthea Sharp is the USA Today bestselling, award-winning author of several YA urban fantasy series, including Feyland and the Darkwood trilogy. Her books have won or placed in the PRISM, the Maggie, the National Reader’s Choice Award, the Write Touch Reader’s Award, the Heart of Excellence, and the Book Buyer’s Best contests.