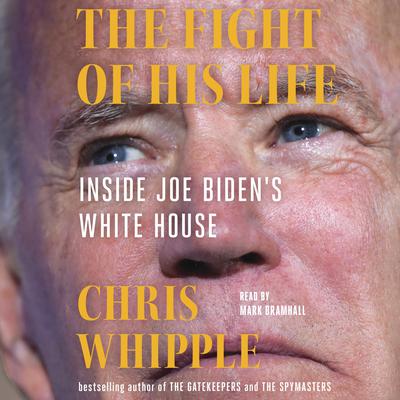 The Fight of His Life: Inside Joe Biden's White House

From the former 60 Minutes producer and New York Times bestselling author of The Gatekeepers comes an in-depth, insider’s look at how President Joe Biden and his seasoned team have battled to achieve their agenda—based on the author’s extraordinary access to the White House during more than a year of crises at home and abroad.

In January of 2021, the Biden administration inherited a country in chaos. The president and his team were forced to deal with multiple emergencies simultaneously—including a lethal pandemic, a plummeting economy, a right-wing insurrection, racial injustice, and a series of climate disasters thought to be caused by rampant global warming. As the months passed, notable legislative victories were offset by partisan gridlock. And no sooner had outrage quieted over Biden’s awkward exit from Afghanistan than Vladmir Putin launched an unprovoked invasion of Ukraine, imperiling even NATO-protected countries and handing Biden and his team their gravest test yet.

Now, in The Fight of His Life, prizewinning journalist Chris Whipple takes us inside the Oval Office as the critical decisions of Biden’s presidency are being made. With unprecedented deep access to nearly all of Biden’s inner circle—including Chief of Staff Ron Klain and other senior officials—Whipple pulls back the curtain on the internal power struggles and back-room compromises. Featuring newsmaking revelations including how renegade Trump officials enabled the transfer of power, which key staffers really make the White House run (it’s probably not who you think), what lies at the heart of Joe Biden’s working relationship with Vice President Kamala Harris, and which senior official nearly resigned at one of the administration’s low points, The Fight of His Life delivers a surprising portrait of politics on the edge.

A vivid, fly-on-the-wall account of one of America’s most consequential presidencies, The Fight of His Life showcases the insightful analysis and interpretation that is Chris Whipple’s signature.

Chris Whipple is an acclaimed writer, journalist, documentary filmmaker, and speaker. A multiple Peabody and Emmy Award-winning producer at CBS’s 60 Minutes and ABC’s Primetime, he is the chief executive officer of CCWHIP Productions. He has also been the executive producer and writer of Showtime’s The Spymasters: CIA in the Crosshairs.