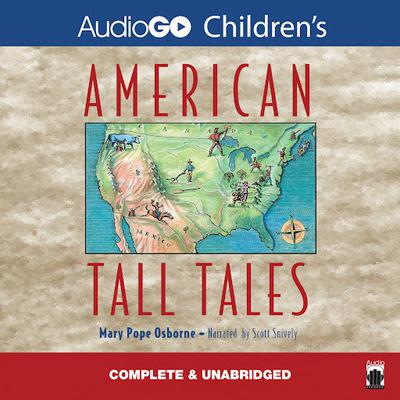 This superb collection of larger-than-life folk heroes aptly represents America's robust early days, perfectly capturing the vitality of the men and women who carved a new country out of the North American wilderness. Author Mary Pope Osborne supplies a fascinating introduction to each tale and then gives her own original twist to the telling of it. Get ready for an unforgettable listen as actor Scott Snively takes you on a wild ride from sea to shining sea!

“American folk heroes of the nineteenth century spring to life in these splendidly retold sagas…Osborne’s reputation as a gifted raconteur is reaffirmed in this compendium, which retells the legends of familiar figures as well as lesser known personalities” —Publishers Weekly
“In this fine recording, Osborne has selected American greats and, from each body of adventure, timeless episodes. With his talent for regional accents, Scott Snively takes the listener directly to that part of the United States and creates vivid characters.” —AudioFile
“The rip-roaring action, broad humor, and colorful language of the convention are all here, but the violence is kept to a minimum and the laughs aren’t at anyone’s expense, except perhaps the subjects, who feel rather foolish on occasion…[A] superlative offering.” —School Library Journal
“[The] stories are thoroughly engaging. The exaggerated humor will have children eager to turn the pages for one more story.” —Children’s Literature

Mary Pope Osborne is the author of the bestselling Magic Tree House series, and she works with her husband Will and her sister Natalie on the nonfiction companion series, Magic Tree House Research Guides. She has also written many acclaimed retellings of myths, folktales, and works of historical fiction. Many of her books have been named on lists of best books of the year.