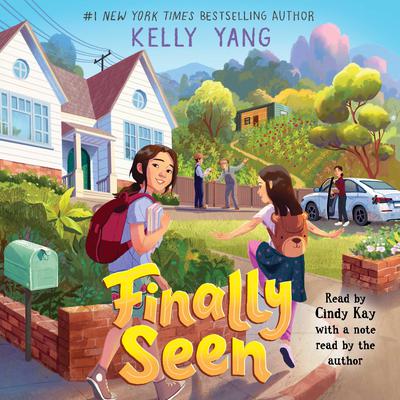 From the New York Times bestselling author of Front Desk comes a gripping middle grade novel about a young girl who leaves China to live with her parents and sister, after five years apart, and learns about sisterhood, family, and the power of community.

When ten-year-old Lina Gao steps off the plane in Los Angeles, it’s her first time in America and the first time seeing her parents and her little sister in five years! She’s been waiting for this moment every day while she lived with her grandmother in Beijing, getting teased by kids at school who called her “left behind girl.” Finally, her parents are ready for her to join their fabulous life in America! Except, it’s not exactly like in the postcards:

1. School’s a lot harder than she thought. When she mispronounces some words in English on the first day, she decides she simply won’t talk. Ever again.

2. Her chatty little sister has no problem with English. And seems to do everything better than Lina, including knowing exactly the way to her parents’ hearts.

3. They live in an apartment, not a house like in Mom’s letters, and they owe a lot of back rent from the pandemic. And Mom’s plan to pay it back sounds more like a hobby than a moneymaker.

As she reckons with her hurt, Lina tries to keep a lid on her feelings, both at home and at school. When her teacher starts facing challenges for her latest book selection, a book that deeply resonates with Lina, it will take all of Lina’s courage and resilience to get over her fear in order to choose a future where she’s finally seen.

Kelly Yang is the author of six books for children and young adults, including Front Desk, winner of the 2019 Asian Pacific American Award for Children’s Literature and the Parents’ Choice Gold Medal, was the 2019 Global Read Aloud, and has earned numerous other honors including being named a best book of the year by the Washington Post, NPR, Kirkus Reviews, School Library Journal, Publishers Weekly, and Amazon.com. Learn more at KellyYang.com.