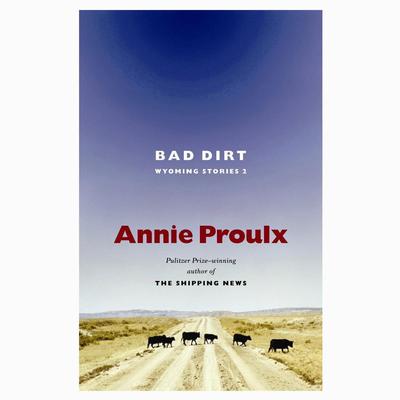 Annie Proulx follows the success of Close Range with another remarkable collection of stories. Bad Dirt is filled with the vivid characters for which Proulx has become known.

In "The Contest," the male population of Elk Tooth, Wyoming, vows to put aside their razors for two seasons, ante up ten dollars each, and wait to see who has the longest beard on July 4. Deb Sipple, the moving protagonist of "That Trickle-Down Effect," finds that his opportunism—and his smoking habit—lead to a massive destruction.

In every story in this book, Proulx displays her wit and her knowledge of the West, of history, and most of all of characters who must use sheer will and courage to make it in tough territory.

“Like Flannery O’Connor and William Faulkner, Proulx has found a tone and style of delivery that allow her to be humorous and existentially black at the same time. No other writer in America gets away with this combination.” —Denver Post
“Proulx does leaven her tales of hardship and woe with a dry humor, and she doesn’t forget to tackle the misguided romance sought by newcomers to the land…A rich, colorful picture of local life.” —Publishers Weekly
“A literary trail ride with some great views…This collection is entertaining and contains some gorgeous descriptions of Wyoming.” —AudioFile
“Vivid language…Proulx’s vision, like the Wyoming countryside she so meticulously describes, is unyielding.” —Booklist