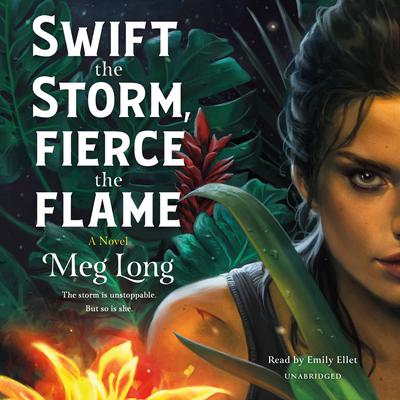 Swift the Storm, Fierce the Flame: A Novel

A girl hell-bent on finding the friend she lost.

A planet on the brink of total destruction.

Only one way to find answers amid the chaos: team up with a traitor to stage a revolution.

After a mission gone awry two years ago, Remy Castell has been desperately searching across worlds to find the friend she failed to save—the friend who changed her life by helping her overcome the brainwashing she was subjected to as a genetically engineered corporate agent.

Since then, she’s been chasing the only lead she has: fellow genopath Kiran Lore, the same secretive ex-squad-mate who left her for dead when she compromised that mission. She nearly caught up to him on Tundar before joining the infamous sled race alongside outcast Sena and her wolf companion Iska. Now, all three of them have tracked Kiran back to Maraas, the jungle planet where Remy lost everything. But nothing on Maraas is how it was two years ago. Syndicates and scavvers alike are now trying to overthrow a megalomaniac corpo director, which Remy wants nothing to do with; fighting against corpos is as useless as trying to stay dry in the middle of the giant hell-storm that encircles the planet. But the storm—and the rebellion—are growing stronger by the minute.

When Remy finds Kiran, he doesn’t run away like she expects. Instead, he offers her a deal: help with the revolution and he’ll reunite her with her friend. But can she really trust the boy who betrayed her once before? With the entire planet on the edge of all-out war, Remy will have to decide just how far she’s willing to go to save one girl before the impending storm drowns them all.

Meg Long was born and raised in Louisiana and originally wanted to be a spy. Instead she somehow found herself teaching overseas in China and Malaysia before ending up in Colorado, where it snows entirely too much. She taught middle and high school for eight years before jumping to the tech industry as a content writer. When not reading or writing, she’s kicking things at her Muay Thai gym with her boyfriend, playing video games, or obsessing over Sailor Moon.