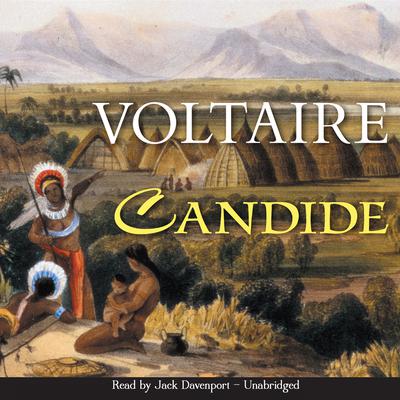 By Voltaire
Read by Jack Davenport

Candide, published simultaneously in five European capitals in 1759, became an instant bestseller and is now regarded as one of the key texts of the Enlightenment. Voltaire’s preoccupations with evil and with various kinds of human folly and intolerance found a perfect vehicle in the philosophical tale. A master storyteller, he combined often wildly entertaining action with profoundly serious sense, parodying the traditional chivalric and oriental tales with which his public was more familiar to create a witty allegory of a young man whose optimism gives way to disillusionment after a series of terrible misfortunes.

“Penned by that Renaissance man of the Enlightenment, Voltaire, Candide is steeped in the political and philosophical controversies of the 1750s. But for the general reader, the novel’s driving principle is clear enough: the idea (endemic in Voltaire’s day) that we live in the best of all possible worlds, and apparent folly, misery, and strife are actually harbingers of a greater good we cannot perceive, is hogwash.” —Amazon.com, editorial review

Voltaire (1694–1778), born François-Marie Arouet, was a French Enlightenment writer, historian, and philosopher known for his wit, philosophical sport, and defense of civil liberties. He produced works in almost every literary form, including poetry, novels, essays, plays, historical and scientific works, and over two thousand books and pamphlets.