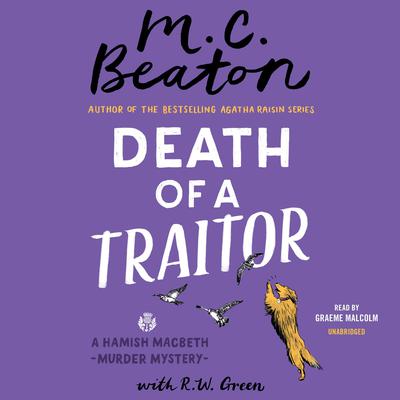 Death of a Traitor

Village constable Hamish Macbeth—Scotland's most quick-witted but unambitious policeman—is back to investigate the disappearance of a local woman who is more than she seems, in this mystery in M. C. Beaton's beloved, New York Times bestselling series.

Kate Hibbert is all too eager to lend a hand to her neighbors. Although she has been a resident of the Highland village of Lochdubh for only a year, in that time Kate has alienated one too many of its residents with her interfering—and not entirely well-intentioned—ways.

When Kate’s neighbor sees her lugging a heavy suitcase to the bus stop, he hopes that the prying woman is gone for good. But two weeks later, Kate’s cousin arrives in town with the news that Kate has gone missing.

Hamish Macbeth is called in to investigate the disappearance, and soon he is befuddled by the discovery of Kate’s body and her suitcase—but with the sneaking suspicion that Kate was someone much more sinister than she appeared.

“Hamish…investigates when Kate Hibbert, a relative newcomer to the village, goes missing…Pompous, officious Detective Chief Inspector Blair, ‘an evil scunner’ and ‘a bungling eejit,’ as well as Hamish’s nemesis, provides an obstacle for Hamish to bump up against.” —Publishers Weekly

M. C. Beaton (1936–2019) won international acclaim for her New York Times bestselling Agatha Raisin novels and Hamish Macbeth mysteries. Her Agatha Raisin and Hamish Macbeth titles have sold more than twenty-one million copies worldwide and have both been adapted into BBC television series. She has been hailed as the “Queen of Crime” by Toronto’s Globe and Mail, and her books have been translated into seventeen languages.