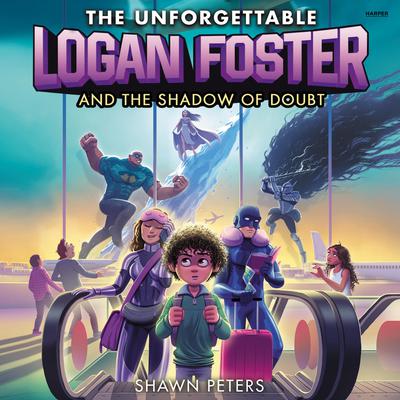 The Unforgettable Logan Foster and the Shadow of Doubt

Sometimes, it’s not so easy to tell the differences between good guys and the bad ones. Filled with superheroes, supervillains, and epic showdowns, The Unforgettable Logan Foster and the Shadow of Doubt is the thrilling second book in the acclaimed Logan Foster series from super-author Shawn Peters.

After using his photographic memory to defeat Necros and her minions, Logan has seen his life change completely. Now, the Multinational Authority for Superhuman Control (MASC) is keeping a close eye on everything he does in order to keep him out of Necros’s clutches.

But when Logan stumbles upon the fact that Necros was in the area on the very same day he became an orphan, he can’t help but wonder—is MASC hiding the truth about who his parents really are?

When superheroes mysteriously start going missing, all signs point to the same supervillain who also may hold the clues to Logan’s past. Only Logan—along with his super-strong best friend, Elena, and their new bestie, Connie—can uncover the truth, find the missing superheroes, and stop Necros. Will Logan be able to save the day and uncover the truth about his birth parents before it’s too late? It’s another action-packed Logan Foster adventure from super-author Shawn Peters.