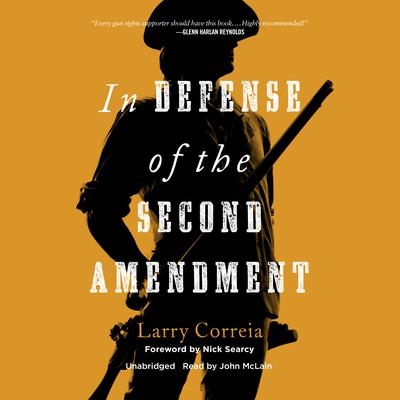 In Defense of the Second Amendment

What part of the Second Amendment don’t you understand?

Bringing with him the practical experience that comes from having owned a high-end gun store—catering largely to law enforcement—and as a competitive shooter and self-defense trainer, Correia blasts apart the emotion-laden, logic-free rhetoric of the gun-control fanatics who turn every “mass shooting” into a crazed call for violating your rights, abusing the Constitution—and doing absolutely nothing to really fight crime.

In his essential new book, In Defense of the Second Amendment, Correia reveals:

Correia’s promise: “Believe me, I’ve heard every argument relating to gun control possible. I can show you how to defend your rights.”

Urgent, informed, with vitally important information for whoever who owns a gun or is thinking about owning a gun or who cares about the preservation of our constitutional rights, In Defense of the Second Amendment is a landmark book of enduring importance.

“Every gun rights supporter should have this book…Highly recommended!” —Glenn Harlan Reynolds, Beauchamp Brogan Distinguished Professor of Law, University of Tennessee, and founder of the InstaPundit blog
“A truly independent life, in fact life itself, pivots on the right and implementation of keeping and bearing arms. Unarmed and helpless is unarmed and helpless, and no man has any right whatsoever to force that upon another man. Case closed.” —Ted Nugent, hunter, rock star, and bestselling author
“Correia...does away with the usual complex legal jargon…Self-defense is absolutely a human right, and this right—your right—should not depend on someone else’s feelings!” —Kendall Jones, Turning Point USA contributor and conservationist

Larry Correia is a multiple nationally bestselling novelist who is best known for his Monster Hunter fiction series. He is a popular blogger who writes often on issues involving Second Amendment rights. His famous essay “An Opinion on Gun Control” was an Internet viral sensation, with more than a million reads, and he writes often for national publications on gun laws and self-defense. He is a graduate of Utah State University.