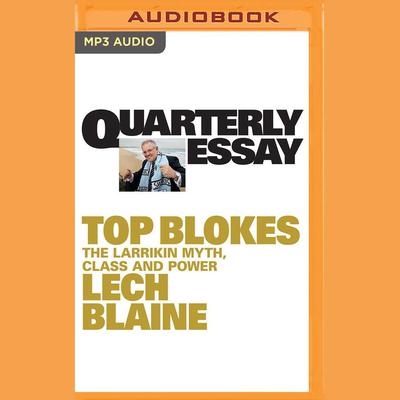 What makes a top bloke? Does the myth of the larrikin still hold sway? And whatever happened to class in Australia?

In this perceptive and often hilarious essay, Lech Blaine dissects some top blokes, with particular focus on Scott Morrison and Anthony Albanese, but stretching back to Bob Hawke and Kerry Packer. This is a riveting narrative of how image conquered politics, just as globalisation engulfed the Australian economy. While many got rich and entertained, look where we ended up.

Blaine shows how first Howard, then Morrison, brought a cohort of voters over to the Coalition side, 'flipping' what was once working-class Labour culture. He weaves in his own experiences as he explores the persona of the Aussie larrikin. What are its hidden contradictions - can a larrikin be female, Indigenous or Muslim, say? - and how has it been transformed by an age of affluence? He makes the case that the time has come to bury a myth and for the nation to seize a new reality.

“Anti-authoritarianism doesn’t need the vocabulary of the bush poets, the accent of Mick Dundee or the imprimatur of the shock-jocks and media tycoons to blossom. It sounds like Grace Tame, and acts like Behrouz Boochani, and looks like Adam Goodes.” (Lech Blaine, Top Blokes)

Lech Blaine is the author of the memoir Car Crash. His writing has appeared in The Monthly, Guardian Australia, The Best Australian Essays, Griffith Review, Kill Your Darlings and Meanjin. He was an inaugural recipient of a Griffith Review Queensland Writing Fellowship.