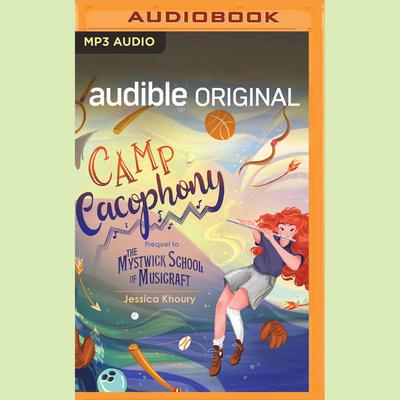 It's two months before Amelia's big audition for the Mystwick School of Musicraft. If she gets in, she will learn to spin music into powerful magic - but her Gran has one last-ditch plan to persuade her out of it: sports camp.

A week of softball, sprinting, and sweaty socks isn't exactly Amelia's idea of a good time - in fact, she's deeply, appallingly unathletic. By the end of day one, she's puked her guts out in track, gotten a black eye in no-contact flag football, and firmly established herself as the Least Valuable Player at camp.

As head counselor, Coach Shawn is determined to make an athlete of Amelia, despite her complete inability to land a single basket in basketball and her high effectiveness at scoring in the wrong net in soccer. And all Amelia wants is some time to herself, so she can practice her flute for the Mystwick auditions.

But everyone's plans are quickly derailed by a series of disasters that strike camp, putting everyone in mortal danger. It's clear that strange magic is at work, and as the only musician around, Amelia suddenly goes from benchwarmer to MVP. But can she discover the source of the malevolent magic - and how to stop it - before the deadly spell reaches its crescendo?

Jessica Khoury is of Syrian and Scottish descent and was born in Toccoa, Georgia. She wrote her first book at age 4, a fan fic sequel to Syd Hoff’s Danny and the Dinosaur, which she scribbled on notebook paper, stapled together, and placed on the bookshelf of her preschool classroom. Since that day, she’s dreamed of being an author.