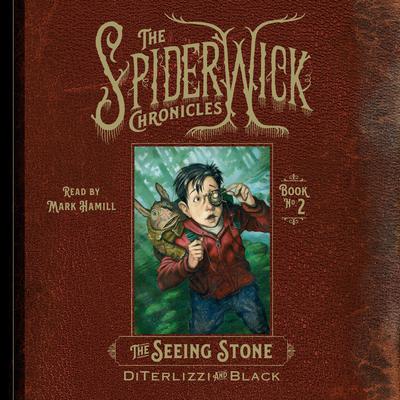 By Tony DiTerlizzi  and Holly Black
Read by Mark Hamill

Mallory and Jake must rescue Simon from the goblins who snatched him in this repackage of the second book in the #1 New York Times bestselling Spiderwick Chronicles.

Thanks to the mysterious field guide left behind by their long-lost great-great-uncle Arthur Spiderwick, life for the Grace kids—Jared, Simon, and Mallory—is beyond weird. When Simon goes missing, Jared is convinced creatures from the faerie world have something to do with it. Mallory is not convinced. That is, until she and Jared have to contend with a band of menacing, marauding goblins. Simon is clearly in danger, and it’s up to Mallory and Simon to save him, before it’s too late…

In honor of the tenth anniversary of the #1 New York Times bestselling Spiderwick Chronicles series, which has more than 12 million copies in print worldwide, this edition of The Seeing Stone features a larger trim size and an original cover with all-new art from Tony DiTerlizzi.

Tony DiTerlizzi is the author of The Search for WondLa and A Hero for WondLa. He is also the cocreator and illustrator of the bestselling Spiderwick Chronicles, as well as the Zena Sutherland Award–winning Ted. His cinematicd version of Mary Howitt’s classic The Spider and the Fly earned him another Zena Sutherland Award and a Caldecott Honor. DiTerlizzi’s art has also appeared on the covers of books by well-known fantasy authors like Peter S. Beagle, J. R. R. Tolkien, Anne McCaffrey, and Greg Bear. His first chapter book, Kenny & the Dragon, debuted as a New York Times bestseller. Currently, he divides his time between Massachusetts and Jupiter, Florida.