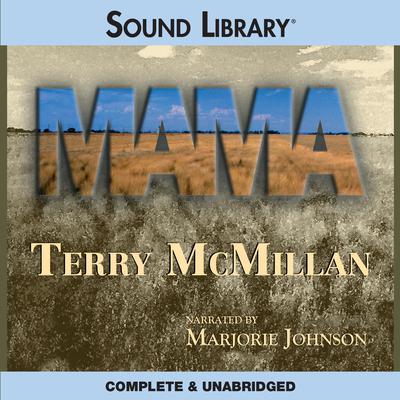 Mildred Peacock is the tough, funny, feisty heroine of Mama, a survivor who’ll do anything to keep her family together. In Mildred’s world, men come and go as quickly as her paychecks, but her five children are her dream, her hope and her future. Not since Alice Walker’s The Color Purple has a black woman’s story been portrayed with such rich power, honesty, and love.

“Terry McMillan’s gutsy style drives Mama along like an engine.” —Cleveland Plain Dealer
“A gutsy depiction of a soul in America…powerfully evocative and inspired.” —Boston Globe
“It doesn’t take a huge stretch of imagination to believe the characters that [McMillan] makes up because they aren’t necessarily made-up. They are people that you could easily picture and their plights are faced by human beings every day…McMillan is a great storyteller.” —Examiner.com
“Marjorie Johnson’s breathy, close-to-the-mike delivery quickly establishes intimacy in the first heartrending scene. Her vocal agility and range draw the listener into the story of an African-American family’s desperate and heroic gamble against the odds. Johnson’s performance celebrates the diversity of the novel’s characters, as well as their strength.” —AudioFile