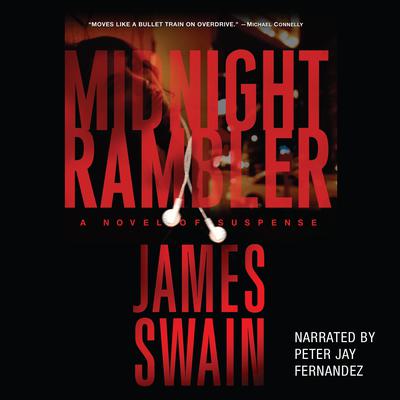 Years ago, South Florida cop Jack Carpenter beat up a murder suspect named Simon Skell, a dangerous predator with a penchant for playing the Rolling Stones' "Midnight Rambler" as he tortured young women. When Jack lost his temper, he lost his job and his marriage, too; so as Skell's early release from prison draws near, the tarnished hero—now a specialist in cases of missing children—sees an opportunity to make things right.

Scrambling to gather more evidence, Jack uncovers a shocking criminal conspiracy: a group of four men who kidnap and kill young women on the margins of society. Teaming up with an FBI agent, Jack must outwit and outrun his enemies.

“If you listen to this book at night, you’ll have every light in the house burning. Detective Jack Carpenter lost his wife and his job with the Miami Police as a result of losing his temper while capturing the sadistic serial killer Simon Skell…Carpenter’s world-weary tone is expertly rendered by Peter Jay Fernandez. The steamy South Florida setting is perfect for the mélange of well-crafted characters, colorful accents, and pulse-quickening plot twists. Don’t say you weren’t warned.” —AudioFile
“Midnight Rambler kept me up all night long, and Jack Carpenter is as appealing a hero as I’ve ever met. The only problem with Swain’s riveting thrillers is they end.” —Tess Gerritsen, author of The Bone Garden
“Midnight Rambler is a heavy hitter, fast and spare. Travis McGee meets Philip Marlowe.” —Randy Wayne White, author of Hunter’s Moon
“The creator of casino expert Tony Valentine produces a suspense crossover…Gone private, Jack is every inch the detective he used to be, and the episodes in which he tracks down his latest targets… are thrilling…Jack’s likely to be a hit with readers who fantasize about noble roughnecks, and a sequel, maybe even a series, seems assured.” —Kirkus Reviews
“Swain, author of the gambling crime series starring Tony Valentine (Grift Sense, etc.), avoids many of the clichés of the antisocial ex-cop novel in this chilling stand-alone…Well-defined characters and intricately woven subplots, one involving a nail-biting scene at Disney World, make this a page-turner.” —Publishers Weekly