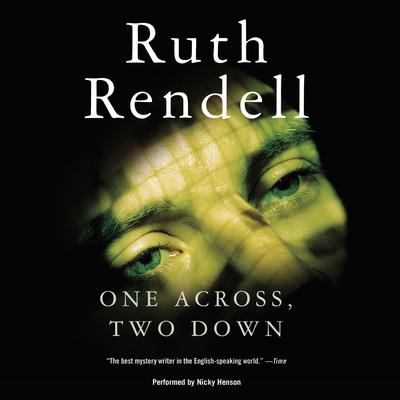 One Across, Two Down

There are only two things in life that interest Stanley: solving crossword puzzles, and getting his hands on his mother-in-law’s money. For 20 years, the puzzles have been his only pleasure, the money his only dream. It has never occurred to Stanley that his mother-in-law would try to outsmart him and the money would never be his. Until now.

It is only now that Stanley, so clever at misleading double meanings and devious clues, decides to construct a puzzle of his own—and so give death a helping hand.

Ruth Rendell (1930–2015) wrote more than sixty novels in a career spanning fifty years. She won numerous awards for her writing, including three Edgars—the highest accolade from Mystery Writers of America—as well as four Gold Daggers and a Diamond Dagger for outstanding contribution to the genre from England’s prestigious Crime Writer’s Association. She was also the winner of the MWA Grand Master Award. A longtime member of the House of Lords, she lived in London.