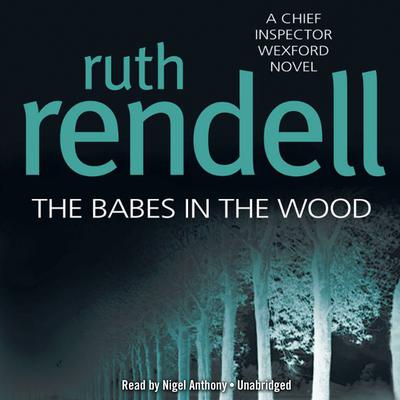 The Babes in the Wood

There hadn't been anything like this kind of rain in living memory. The River Brede had burst its banks, and not a single house in the valley had escaped flooding. Even where Wexford lived, higher up in Kingsmarkham, the waters had nearly reached the mulberry tree in his once immaculate garden. The Subaqua Task Force could find no trace of Giles and Sophie Dade, let alone the woman who was keeping them company, Joanna Troy. But Mrs. Dade was still convinced her children were dead. This was an investigation which would call into question many of Wexford's assumptions about the way people behaved, including his own family.

“Rendell’s gift for intelligent, coolheaded storytelling remains undiminished.” —Entertainment Weekly
“In the matriarchy of British crime fiction, Rendell is the weird sister; her novels concern themselves with the more darkly enigmatic corners of motivation…The plot—a series of puzzles surrounding the disappearance of two teenagers in the care of a family friend—marches efficiently to its unguessable dénouement while demonstrating Rendell’s grasp of the psychological dynamics of seduction and exploitation which lie at the heart of the case.”  —The New Yorker
“Hard to put down…Ruth Rendell is a master of the genre.” —Los Angeles Times
“Spectacular…Rendell writes with a chill poetic precision.” —The Washington Post
“This veteran writer does not disappoint with The Babes in the Wood…Miss Rendell is a master of the psychological twist, and she throws in several before Wexford finds all the answers…If you are not [already] a fan, read this and you will be.” —The Washington Times
“A solid, if not spectacular, entry in the series…as always, Chief Inspector Wexford remains a comfortable companion, with taut, thoughtful and imaginative observations about small-city England and the wider world.” —Publishers Weekly
“Once again, Rendell trots out some sharply drawn characters to grab attention (including, of course, the clever, rather curmudgeonly detective himself) and uses the mystery as the catalyst for the characters’ growth…Wexford gets to the bottom of it all, but readers won't have a clue until the final pages.” —Booklist

Ruth Rendell (1930–2015) wrote more than sixty novels in a career spanning fifty years. She won numerous awards for her writing, including three Edgars—the highest accolade from Mystery Writers of America—as well as four Gold Daggers and a Diamond Dagger for outstanding contribution to the genre from England’s prestigious Crime Writer’s Association. She was also the winner of the MWA Grand Master Award. A longtime member of the House of Lords, she lived in London.