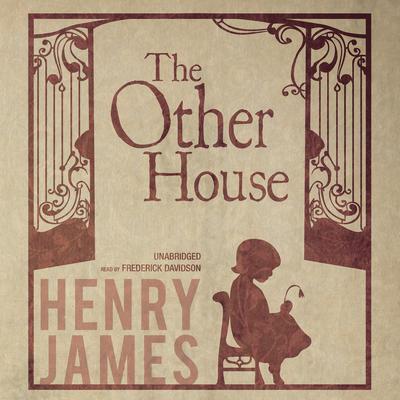 This terse and startling novel is the story of a struggle for possession—and of its devastating consequences. Three women seek to secure the affections of one man, while he, in turn, tries to satisfy them all. But in the middle of this contest of wills stands his unwitting and vulnerable young daughter. The conclusion of The Other House makes it one of the most disturbing and memorable of Henry James’ depictions of the uncontrollable passions that lie beneath the polished veneer of civilized life.

“The Other House is intensely British in its motives and emotions; and its intensity derives precisely from the fact that when the calm is broken, and the conflict…is engaged, the contrast is as of a violent rush of air into a place of quiet.” —Leon Edel, Pulitzer Prize and National Book Award–winning author
“Davidson carefully and subtly chronicles the inhumanity of murder in an understated reading that hints rather than declares, which seems perfect for this psychological study.” —Booklist
“The Other House contains some of the most harrowing, compressed, and ambiguous scenes James ever wrote.” —Threepenny Review
“Played out on the tidy lawns between two aristocratic houses, the staid Eastmead and the boisterous Bounds, a desperately tangled love-scrimmage spirals into a crime of unspeakable brutality, with a deeply unsettling climax. Readers left puzzled by the murky pychosexual terror of James’s The Turn of The Screw should give this passionate melodrama a try.” —Library Journal