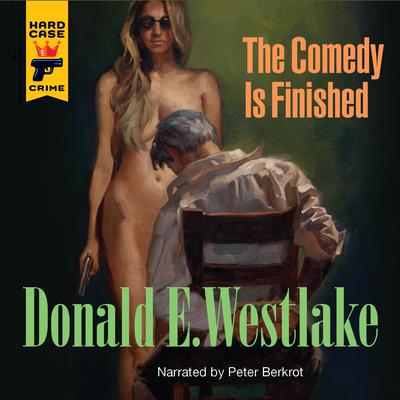 The Comedy is Finished

The year is 1977, and America is finally getting over the nightmares of Watergate and Vietnam and the national hangover that was the 1960s. But not everyone is ready to let it go. Not aging comedian Koo Davis, friend to generals and presidents and veteran of countless USO tours to buck up American troops in the field. And not the five remaining members of the self-proclaimed People's Revolutionary Army, who've decided that kidnapping Koo Davis would be the perfect way to bring their cause back to life.

This is the final, previously unpublished novel from the legendary author Donald Westlake.

“One of the best Westlake novels I’ve read.” —Washington Post
“A terrifying sprint for redemption and rescue with the reader kept in agonizing suspense until the literal last page. Not to be missed.” —Mystery Scene
“We’re all in the presence of the master one last time.” —Open Letters Review
“Halfway into January and we already have the first great book of 2012…some of the finest work of the author’s career. And that is truly saying something.” —Vince Keenan, author and critic
“MWA Grand Master Westlake shows his skill and versatility as an author in this posthumous crime novel…Sharply written and insightful, this ‘lost’ novel is a worthy addition to Westlake’s lengthy catalogue.” —Publishers Weekly
“The characters are well drawn, the dialog flows, and the chapters speed by, making for a breezy, solid read. This late discovery is a welcomed treat for Westlake’s many fans. A natural for all mystery collections.” —Library Journal
“The Comedy Is Finished is a tense, compelling story of captive, captors, and an FBI agent, but it’s also a painfully insightful portrait of a very dark period in US history. All the main characters’ lives have been affected by the war or Watergate, and Westlake, who wrote the novel in the late 1970s, gives each plenty of opportunity to lament what happened to them and relive some of this country’s darkest years. It’s very different from Westlake’s beloved comic crime capers, and although readers old enough to remember those years may find the memories dredged up to be unpleasant, they will probably be hard-pressed to put the book down.” —Booklist
“The story is fascinating and compelling as can certainly be expected from Westlake. Narrator Peter Berkrot’s flat California accent is well suited to the action. His pacing moves the story along, and his characterizations are terrific—especially his voice for the kidnapped comic. Verdict: Although the 1970s setting seems dated, the writing is crisp and the story moves quickly. Westlake’s numerous fans will be thrilled to have this final novel. A fine addition to twenieth-century mystery collections.” —Library Journal (audio review)
“Peter Berkrot’s narration is compelling, and he doesn’t let the story lag…His voices are suited to the well-drawn characters…An absorbing narration.” —AudioFile