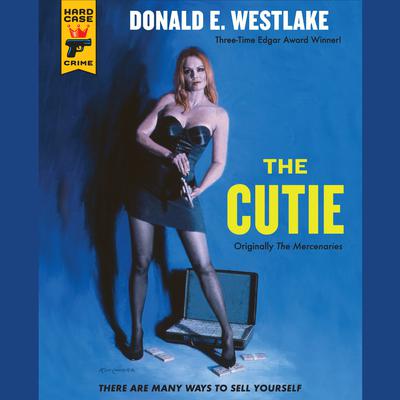 Some people will do anything for money.

Mavis St. Paul had been a rich man's mistress. Now she was a corpse. And every cop in New York City was hunting for the two-bit punk accused of putting a knife in her.

But the punk was innocent. He'd been set up to take the fall by some cutie who was too clever by half. My job? Find that cutie—before the cutie found me.

“This dandy little thriller was first published in 1960 as The Mercenaries, and it’s Westlake at his best. Like the majority of his crime dramas, The Cutie takes place in New York City, a territory Westlake was highly familiar with and used to color his stories with deft, literary strokes…The plot is straightforward and moves at a good clip, allowing readers ample opportunity to collect the clues along with Clay and in the end come to the logical, well set up denouement. Westlake’s characters all come to life quickly in short, skillful paragraphs, and he cleverly layers their personalities with every-day moral issues. Clay is not a mindless thug. He’s an intelligent guy; yet he willfully chose a career of crime. Was it the right choice? By the last chapter of this book, his reassessment brings forth some startling revelations that end the book on the perfect pitch note.” —PulpFictionReviews.com
“Narrator Thorne brings a youthful confidence to the part. But, it’s still strange how Clay is really a cold blooded and murderous thug – Westlake gives him an excellent backstory…The Cutie is fully utterly engaging…[with] Westlake’s masterful storytelling. The Cutie is a gritty, fast paced, and well plotted murder mystery with a highly unusual criminal/detective lead.” —SFFaudio.com
“George ‘Clay’ Clayton is a self-described ‘nanny’ for a New York City crime syndicate. His duties involve ‘putting the kiddies in line’ and occasionally arranging an ‘accident.’ And when some smart aleck commits a murder, bringing the organization too much attention from the law, it’s Clay’s job to track down that ‘cutie.’ Stephen Thorne delivers the noir-style dialogue at a gutsy pace, though in his excitement he occasionally overdoes the tough-guy shtick. Thorne understands the topsy-turvy nature of the story, with criminals in the roles of detectives, and gets the listener to sympathize with the plight of the villains. The Cutie is a crafty little crime story, and Thorne ensures that it’s a suspenseful, speedy listen.” —AudioFile