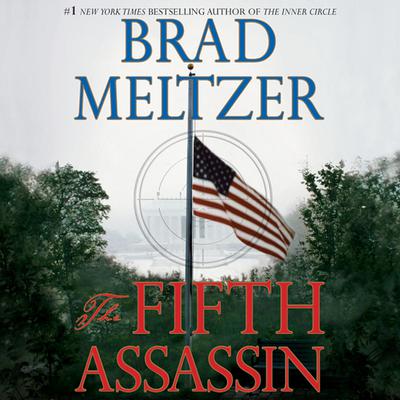 An Amazon Best Book of the Month, January 2013

A 2014 Audie Award Finalist for Thriller/Suspense

From John Wilkes Booth to Lee Harvey Oswald, there have been twenty-four assassination attempts on the President of the United States. Four have been successful. But now, Beecher White—the hero of the #1 bestseller The Inner Circle—discovers a killer in Washington, DC, who’s meticulously re-creating the crimes of the world’s most famous assassins: John Wilkes Booth, Charles Guiteau, Leon Czolgosz, and Lee Harvey Oswald. But scariest of all is what all four assassins have in common. Historians have branded them as four lone wolves. But what if they were wrong? Beecher is about to find out the truth: that over the course of a hundred years, all four assassins were secretly working together. What was their purpose? Who do they really work for? And why are they planning to killing the President today? Beecher’s about to find out. And most terrifying, he’s about to come face-to-face with the fifth assassin.

“Meltzer has earned the right to belly up to the bar with John Grisham, Scott Turow, and David Baldacci.” —People
“Along with some standout character moments, Meltzer lays out a history for Beecher that’s just as interesting as the real-life details and the hunt for the assassin.” —USA Today
“History and suspense collide in shocking ways—and the intensity never lets up. Beecher carries the weight of the story. He’s a great character who will resonate with readers since he’s like the fun next-door neighbor or your best friend in college.” —Washington Post
“History and suspense collide in shocking ways—and the intensity never lets up.” —Washington Post
“When Meltzer got his hooks in me by the end of page three and never stopped reeling me in, I have to say I was impressed. I was also impressed that the hero of The Fifth Assassin (first introduced in The Inner Circle) isn’t a misanthrope cop or hard-drinking PI but a brainy archivist at the National Archives. Beecher White is a glorified librarian, for god’s sake. But with a dash of Sherlock Holmes and a hint of Indiana Jones, White is a refreshingly quirky pursuer of justice, and his hunt for a would-be assassin—which takes us through history and through the secret spaces around Washington, DC—makes for a thrilling read, as well as a nice reminder that a page-turner can be smart, deeply researched, and just plain fun.” —Amazon.com, editorial review
“John Wilkes Booth; Charles Guiteau; Leon Czolgosz; Lee Harvey Oswald; all four presidential assassins were cut down soon after their heinous deed. But did all these ‘lone wolf’ assassins really act alone, or were they part of a conspiracy that stretches into the present? To answer that question and save another president’s life, Beecher White, the hero of Brad Meltzer’s The Inner Circle, must now place himself in grave danger.” —Barnes&Noble.com, editorial review
“In The Fifth Assassin, Meltzer skillfully makes the narrative accessible to newcomers without alienating fans who are familiar with The Inner Circle…History and suspense collide in shocking way—and the intensity never lets up.” —Associated Press
“A fascinating story that blends historical facts, secret codes, with an engrossing mystery...Meltzer is a master at writing his mysteries as puzzles where the pieces are hints dropped throughout the book.” —Military Press
“Not since the Fletcher Knebel seminal Seven Days in May or James Grady’s scathing Days of the Condor has there been a political thriller as relentlessly paced or blisteringly effective as The Fifth Assassin. An early contender for the best thriller of 2013.” —Providence Journal
“Full of surprises, action, twists, and turns, it is a wild and entertaining (and yes, educational) romp, wonderful in every way...Read The Fifth Assassin and prepare to be entranced and enthralled.” —BookReporter
“When you sit down to start reading, make sure the chair has a comfortable cushion because you’ll find yourself unable to put the book down and get anything done. It’s that good a read…As always Meltzer’s character development and believable plot is spot on. Clearly Mr. Meltzer has done his homework. I think his attention to detail, using true facts combined with fiction to tell his story is what makes him a standalone author in the thriller genre and has his fans coming back for more.” —Suspense
“Meltzer’s fans will enjoy the usual sprinkling of history factoids, fast-paced writing, and the double-whiplash bombshell conclusion.” —Kirkus Reviews
“National archivist Beecher White returns in another heart-pounding thriller set in Washington, DC. As if he were spinning plates, Meltzer balances almost too many characters’ stories simultaneously…setting a frantic pace that will leave readers breathless and tense…This roller-coaster car should come with a seatbelt!” —Booklist
“Hold on tight as Scott Brick employs his trademark serious tone to ratchet up the suspense. Such is his vocal power that in the character of the president of the United States his control and presence are felt unequivocally. And the voice he gives to the hesitant institutionalized whack-job evil genius of the story makes us feel the confines of his insanity and the high-security institution that holds him. Listeners of Meltzer’s last book, The Inner Circle, will love the continuation of the intrigue he set in motion.” —AudioFile