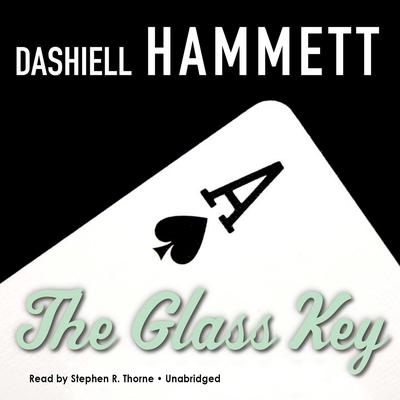 Paul Madvig was a cheerfully corrupt ward heeler who aspired to something better: the daughter of Senator Ralph Bancroft Henry, the heiress to a dynasty of political purebreds. Did he want her badly enough to commit murder? And if Madvig was innocent, which of his dozens of enemies was doing an awfully good job of framing him? Dashiell Hammett's tour de force of detective fiction combines an airtight plot, authentically venal characters, and writing of telegraphic crispness.

“The plot of The Glass Key is one long maneuver—speedballing toward a futile resolution. It’s Hammett’s flat-affect tale of grasping men who want things and don’t know what to do with them when they get them. It’s a short novel with epic sweep.” —Guardian (London)
“Stephen Thorne underplays his tough-guy voice to great advantage. His female voices are so good that you won’t give them a second thought.” —AudioFile
“Ned Beaumont is a new kind of hard-boiled hero: morally ambiguous, of limited effectiveness, neither crack-shot nor pugilist nor deductive whiz.” —DetNovel.com

Dashiell Hammett (1894–1961) was an American author of hard-boiled detective novels and short stories. He is widely regarded as one of the finest mystery writers of all time. In addition to The Maltese Falcon, his pioneering novels include Red Harvest, The Dain Curse, The Glass Key, and the #1 New York Times bestseller The Thin Man.