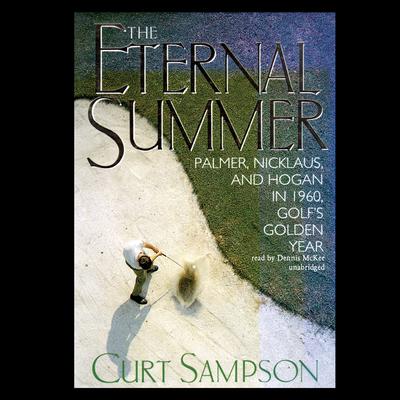 Was there ever a year in golf like 1960? It was the year that the sport and its vivid personalities exploded on the consciousness of the nation, when the past, present, and future of the game collided. Television, still a new medium, provided a fresh window to the show and enabled this "rich man's sport" to win over millions of new fans.

Here was Arnold Palmer, the working man's hero, "sweating, chain-smoking, shirt-tail flying," and winning, it seemed, every tournament with a last-second charge. Ben Hogan, the greatest player of the 1950s, was Palmer's opposite, a perfectionist battling the twin demons of age and nerves. And making his debut in the big time was a chunky, crew-cut college kid who seemed to have the makings of a champion--twenty-year-old Jack Nicklaus.

Would Palmer win the mythical Grand Slam of golf? Could Hogan win one more major tournament? Was Nicklaus the real thing? Even more than an intimate portrait of these men and their exciting times, The Eternal Summer is also an entertaining, perceptive, and hypnotically readable exploration of professional golf in America.

“If you don’t appreciate the summer of 1960, don’t call yourself a golfer. The Eternal Summer is what professional golf used to be and should be—colorful, exciting, and memorable.” —Golfweek
“Sampson…makes a convincing case that 1960 was a watershed for the pro links game. It was the year when the aging Ben Hogan, almost literally on his last legs (he had been badly mangled in an auto crash), was barely hanging on to his past glory; rising star Arnold Palmer was starting to draw the crowds of fans who eventually turned into Arnie's Army; and 20-year-old Jackie Nicklaus was just making his presence known. Even more significant, however, was the increasing interest of major corporations in associating themselves with events on the pro tour and in promising larger and larger purses, a trend that did indeed change the game forever.” —Publishers Weekly
“Sampson is passionate about golf, and his attention to detail is superb. Dennis McKee reads the book as if he’s in the gallery; he is soft-spoken and reverent…[McKee] is at his best when describing the golfers’ styles and personalities. His portrayals of Ben Hogan’s coldness and intensity, and Arnold Palmer’s willingness to take every chance in order to win, are especially memorable.” —AudioFile
“This is a well-told reminiscence of professional golf during the 1960 season. Sampson, a former professional, writes from a love for the sport and deftly weaves in the careers of stellar performers Arnold Palmer, Sam Snead, and Jack Nicklaus. While each golfer was at a different career stage during this one season, their paths crossed at several events, most notably the US Open…This volume succeeds in bringing the three together, just as they were in 1960.” —Library Journal

Curt Sampson, a former professional golfer, is the author of several books, including The Eternal Summer, Full Court Pressure, and The Masters. Sampson lives in Bristol, Texas, with his wife and two children.