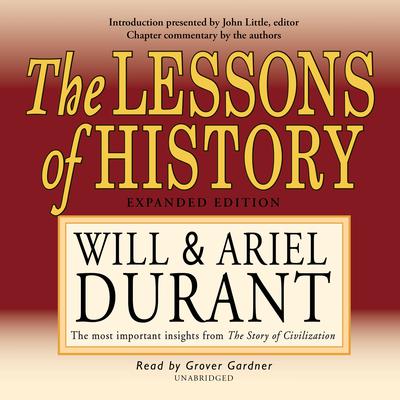 The Lessons of History

The authors devoted five decades to the study of world history and philosophy, culminating in the masterful eleven-volume Story of Civilization. In this compact summation of their work, Will and Ariel Durant share the vital and profound lessons of our collective past. Their perspective, gained after a lifetime of thinking and writing about the history of humankind, is an invaluable resource for us today. The rare archival recordings of the Durants in conversation, made from 1957–1977, illuminate our present condition and offer insightful guidance for the future.

“Prime historical data and observations of humanity’s past and its potential future…rich and witty counterpoints…This classic, influential work is handled impressively.” —AudioFile

Will Durant (1885–1981) was an award-winning American writer, historian, and philosopher. He and his wife were awarded the Pulitzer Prize for General Nonfiction in 1968 for Rousseau and Revolution, and he was a recipient of the Presidential Medal of Freedom. Durant spent over forty years writing the critically acclaimed eleven-volume Story of Civilization, the later volumes with the help of his wife, Ariel. He sought to revitalize history by unifying and humanizing the great body of historical knowledge, which had become voluminous and fragmented into esoteric subcategories. He also strove to bring philosophy to the common man. Durant was a champion of human rights, social reform, and the brotherhood of man long before they became well-known issues.

Ariel Durant (1898–1981) was a Russian-born American researcher and writer and the coauthor of the eleven-volume Story of Civilization with her husband Will Durant. Ariel and Will Durant were jointly awarded the Pulitzer Prize for General Nonfiction in 1968 and the Presidential Medal of Freedom in 1977. Ariel was named the 1977 Woman of the Year by the city of Los Angeles.