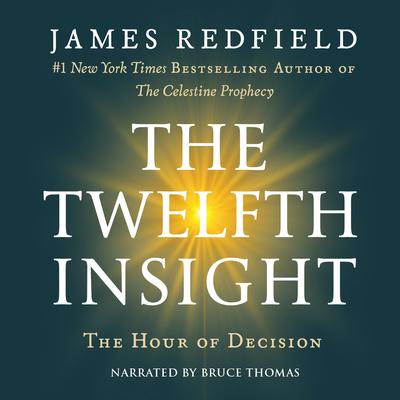 The Twelfth Insight: The Hour of Decision

On December 21, 2012, the Mayan calendar will end. Many see it as an apocalyptic sign. But is it? In The Twelfth Insight, the long-awaited fourth book in the beloved Celestine series, we again follow our hero and his close friend Wil. They have just received a portion of another ancient and mysterious manuscript that describes a secret approach to spirituality that is silently arriving in the second decade of the twenty-first century. But the manuscript is only available in fragments. To understand its full meaning for mankind, our hero and Wil begin an urgent search to find the message in its entirety. As they embrace the power of Synchronicity and begin their search, they are confronted by powerful political forces and religious extremists that stand in the way of these spiritual revelations.

“The godfather of gurus is back…the style is clear and engaging.” —Daily Express, praise for The Celestine Vision
“Redfield’s previous books dominated best-seller lists for years, and his return will stoke avid interest.” —Booklist

James Redfield is the New York Times bestselling author of The Celestine Prophecy, which was the number-one American book in the world in 1995 and 1996 and the number-one international bestseller of 1996. This phenomenal novel spent over three years on the New York Times bestsellers list. Redfield continued the story with the sequels The Tenth Insight, The Secret of Shambhala, and The Twelfth Insight. He is also the author of the nonfiction title Celestine Vision and coauthor of God and the Evolving Universe. He cowrote and coproduced the film version of The Celestine Prophecy.