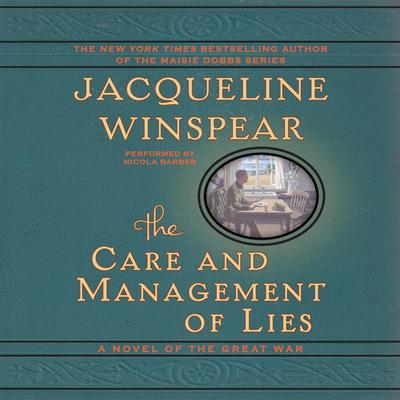 The Care and Management of Lies: A Novel of the Great War

The New York Times bestselling author of the Maisie Dobbs series turns her prodigious talents to this World War I standalone novel, a lyrical drama of love struggling to survive in a damaged, fractured world.

By July 1914, the ties between Kezia Marchant and Thea Brissenden, friends since girlhood, have become strained—by Thea’s passionate embrace of women’s suffrage, and by the imminent marriage of Kezia to Thea’s brother, Tom, who runs the family farm. When Kezia and Tom wed just a month before war is declared between Britain and Germany, Thea’s gift to Kezia is a book on household management—a veiled criticism of the bride’s prosaic life to come. Yet when Tom enlists to fight for his country and Thea is drawn reluctantly onto the battlefield, the farm becomes Kezia’s responsibility. Each must find a way to endure the ensuing cataclysm and turmoil.

As Tom marches to the front lines, and Kezia battles to keep her ordered life from unraveling, they hide their despair in letters and cards filled with stories woven to bring comfort. Even Tom’s fellow soldiers in the trenches enter and find solace in the dream world of Kezia’s mouth-watering, albeit imaginary meals. But will well-intended lies and self-deception be of use when they come face to face with the enemy?

Published to coincide with the centennial of the Great War, The Care and Management of Lies paints a poignant picture of love and friendship strained by the pain of separation and the brutal chaos of battle. Ultimately, it raises profound questions about conflict, belief, and love that echo in our own time.

“An engaging picture of the human spirit in a distant time of war, World War I, from the battlefields to the home front in an English village.” —Herman Wouk, Pulitzer Prize–winning author
“There is power in subtlety. This one is a stunner.” —Martin Cruz Smith, #1 New York Times bestselling author
“A haunting evocation, from an unusual angle, of the war that cast such a shadow over the whole twentieth century. Jacqueline Winspear knows her native England, and the human heart, very well indeed.” —Adam Hochschild, New York Times bestselling author
“In this dazzling novel Jacqueline Winspear writes irresistibly about the First World War, both in the trenches of France and the fields of England. Her characters walk off the page and into our imaginations, as we fight with them, farm with them, cook with them. I devoured this book.” —Margot Livesey, New York Times bestselling author
“Five kind and honorable people are caught up in the depredations of the Great War in this first stand-alone novel by the author of the Maisie Dobbs mystery series…A sad, beautifully written, contemplative testament.” —Kirkus Reviews (starred review)
“The Great War’s impact on the home front and battlefield is portrayed in Winspear’s winning stand-alone tale about two girlfriends and how their disparate lives entwine when one of them marries the other’s brother…While questioning war’s value and showing its terrible effects off the battlefield, Winspear fashions a stunning trajectory for her main characters.” —Publishers Weekly
“Winspear’s beloved period mysteries featuring Masie Dobbs depict an England haunted by memories of the Great War, so it’s no surprise that she uses the conflict as the backdrop to this elegiac historical…Though this is not a mystery, Winspear’s fans should welcome the keen period detail and thoughtful tone so familiar from the Maisie Dobbs books, while historical fiction readers will be gripped by this sensitive portrayal of ordinary men and women on the home front and battlefield.” —Library Journal
“In a stand-alone departure from her popular post-WWI mystery series featuring psychologist Maisie Dobbs, Winspear has created memorable characters in a moving, beautifully paced story of love and duty.” —Booklist
“Narrator Nicola Barber builds tensions and personalities with a delicate touch. Newlyweds Tom and Kezia keep busy with the family farm even as the ominous rumblings of WWI are being felt around the world. Barber keeps her performance understated and charming. Later, as Tom fights on the front in France, his sister, Thea, Kezia’s best friend, enlists as an ambulance driver. From the home front, Kezia writes to Tom, describing sumptuous meals she imagines preparing for him. Barber’s sensitive delivery of Winspear’s precise period details and mannered character behaviors is entirely convincing. Listeners spend time with a group of ethical, decent people, and Barber makes them real.” —AudioFile