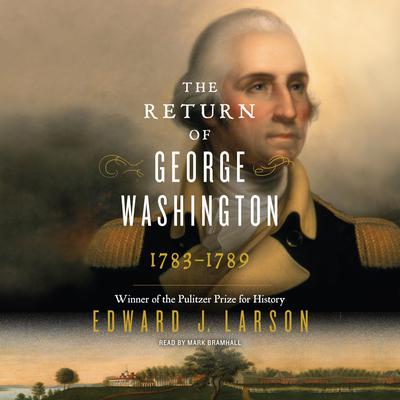 "An elegantly written account of leadership at the most pivotal moment in American history" (Philadelphia Inquirer): Pulitzer Prize-winning historian Edward J. Larson reveals how George Washington saved the United States by coming out of retirement to lead the Constitutional Convention and serve as our first president.

After leading the Continental Army to victory in the Revolutionary War, George Washington shocked the world: he retired. In December 1783, General Washington, the most powerful man in the country, stepped down as Commander in Chief and returned to private life at Mount Vernon. Yet as Washington contentedly grew his estate, the fledgling American experiment floundered. Under the Articles of Confederation, the weak central government was unable to raise revenue to pay its debts or reach a consensus on national policy. The states bickered and grew apart. When a Constitutional Convention was established to address these problems, its chances of success were slim. Jefferson, Madison, and the other Founding Fathers realized that only one man could unite the fractious states: George Washington. Reluctant, but duty-bound, Washington rode to Philadelphia in the summer of 1787 to preside over the Convention.

Although Washington is often overlooked in most accounts of the period, this masterful new history from Pulitzer Prize-winner Edward J. Larson brilliantly uncovers Washington’s vital role in shaping the Convention—and shows how it was only with Washington’s support and his willingness to serve as President that the states were brought together and ratified the Constitution, thereby saving the country.

“Illuminating history of an overlooked period in the life of our first president…Profound, even affectionate, scholarship infuses every graceful sentence.” —Kirkus Reviews (starred review)
“After eight years of leading the fledgling colonies in their war for independence, George Washington resigned as commander-in-chief in order to return to private life. Yet the difficulties of establishing a new nation drew Washington back, and historian Larson, Pulitzer Prize–winner for Summer for the Gods, vividly recounts those events that led to Washington’s election as the first president of the United States…Larson’s compulsively readable history shines new light on a little-discussed period of Washington’s life, illustrating his role as the indispensable American.” —Publishers Weekly
“Larson is an exceptionally fine historian, storyteller, and prose master, and Mark Bramhall amplifies those qualities in his restrained and expertly paced narration. Wisely—thankfully—Bramhall doesn’t attempt to reproduce the voices of Washington or others but through subtle changes in tone and inflection suggests character, temperament, and state of mind. On the page, eighteenth-century rhetoric can be difficult to parse from writer to writer, and for that reason alone an audio performance is a convenience and an enhancement. Here, too, Washington—remote and passive as a historical figure—comes to life as a farmer, botanist, landowner, politician, and a man you’d like to spend an evening with.” —AudioFile
“Larson is a skilled storyteller combining scholarly research with a flair for relating historical events and personages to general readers.” —Library Journal
“Fne and engrossing…Mr. Larson, a history professor at Pepperdine University, engagingly argues that the stretch between 1783 and 1789 was as important to Washington—and to America—as all that preceded and followed it..” —Wall Street Journal

Edward J. Larson received the Pulitzer Prize for History for Summer for the Gods: The Scopes Trial and America’s Continuing Debate over Science and Religion. He is the author and co-author of several other nonfiction books. He was an inaugural fellow at the National Library for the Study of George Washington. He is a professor of history and holds the Hugh & Hazel Darling Chair in Law at Pepperdine University. He travels widely as a media commentator, visiting instructor, and guest speaker.