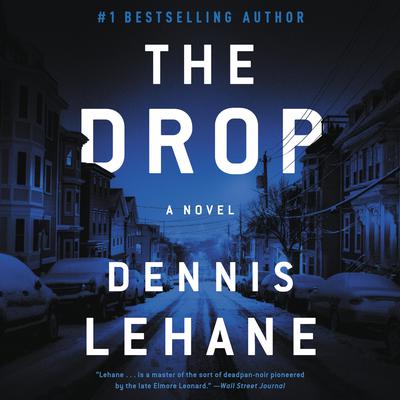 New York Times bestselling author Dennis Lehane returns to the streets of Mystic River with this love story wrapped in a crime story wrapped in a journey of faith—the basis for the major motion picture The Drop, from Fox Searchlight Pictures directed by Michaël Roskam, screenplay by Dennis Lehane, and starring Tom Hardy, Noomi Rapace, and James Gandolfini.

Three days after Christmas, a lonely bartender looking for a reason to live rescues an abused puppy from a trash can and meets a damaged woman looking for something to believe in. As their relationship grows, they cross paths with the Chechen mafia; a man grown dangerous with age and thwarted hopes; two hapless stick-up artists; a very curious cop; and the original owner of the puppy, who wants his dog back. . . .

“As authentically grounded in place as his earlier works and more pleasurable than any tie-in novelization…has a right to be. And The Drop benefits from bracing blasts of Lehane-ian humor.” —Boston Globe
“This gritty gem from Lehane has a curious origin. The short story ‘Animal Rescue,’ which appeared in 2009’s Boston Noir, was the basis for the screenplay of the soon-to-be-released film The Drop, to which this is the tie-in. Boston bartender Bob Saginowski pulls a beaten pup from a winter trash can, a small good deed with large consequences…A parade of weary, quirky characters—thieves, thugs, and hard guys—will resonate with Lehane fans…Stark and moving.” —Publishers Weekly
“Even before the announcement that James Gandolfini would play the lead character in the movie version of The Drop, it was clear that the character was created with him in mind. To that end, Jim Frangione performs the audiobook with a remarkable nod toward Gandolfini as Cousin Marv. It’s not an imitation but enough of an echo of Gandolfini’s Tony Soprano to make this book work on many levels. The writing is expert in its simplicity.” —AudioFile