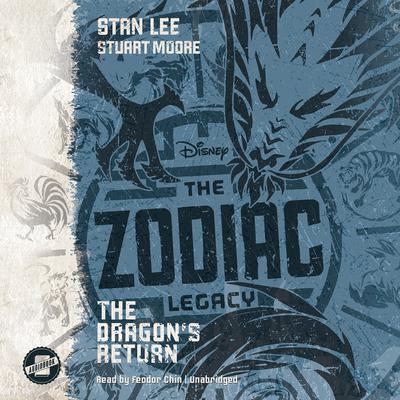 The Zodiac Legacy: The Dragon’s Return

By Stan Lee and Stuart Moore
Read by Feodor Chin

One year after receiving the power of the Zodiac, Steven Lee and his teammates have started to master their abilities. But when his team seems to be falling apart, Steven has to find a way to be a leader, before there isn’t a team to lead anymore. Meanwhile, the power-mad Maxwell and his Vanguard have returned and are planning their next move! With allegiances shifting around him and the line between “good guys” and “bad guys” becoming blurrier and blurrier, Steven must figure out whom he can really trust—before it’s too late!

Stan Lee is known to millions as the man whose Super Heroes propelled Marvel to its preeminent position in the comic book industry. His co-creations include Spider-Man, The Avengers, Iron Man, The Incredible Hulk, The Fantastic Four, as well as hundreds of others. He introduced Spider-Man as a syndicated newspaper strip that became the most successful of all syndicated adventure strips and has appeared in more than 500 newspapers worldwide.

Stuart Moore has been a writer, a book editor, and award-winning comics editor. His recent writing includes Civil War, the first in a new line of prose novels from Marvel Comics; The Art of Iron Man 3; and The 99, a multicultural super hero comic from Teshkeel.