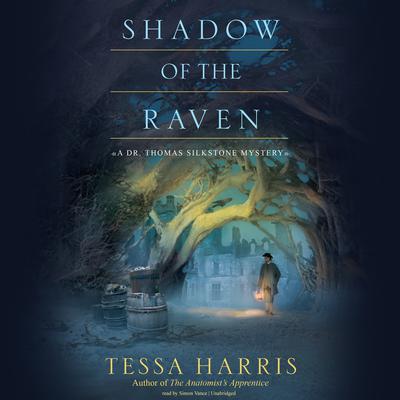 Shadow of the Raven: A Dr. Thomas Silkstone Mystery

In the notorious mental hospital known as Bedlam, Dr. Thomas Silkstone seeks out a patient with whom he is on intimate terms. But he is unprepared for the state in which he finds Lady Lydia Farrell. Shocked into action, Thomas vows to help free Lydia by appealing to the custodian of her affairs, Mr. Nicholas Lupton.

But when Silkstone arrives at the Boughton Estate to speak to Lupton, he finds that sweeping changes threaten to leave many villagers destitute. After a man dies in the woods, it appears that someone has turned to murder to avenge their cause. But for Thomas, a postmortem raises more questions than answers, and a second murder warns him of his potentially fatal situation. Soon he discovers a conspiracy far more sinister than anything he has ever faced.

“Deception, murder, and land wars thwart Dr. Thomas Silkstone’s latest attempt to find happiness with his beloved Lydia…One disaster relentlessly follows another for the lovelorn doctor from the Colonies.” —Kirkus Reviews
“While this is a series best consumed in order, enough backstory is included for a newcomer to pick up the plot easily. It benefits from the narration by Simon Vance, who reads with a number of voices and accents for a fully dramatic performance. Verdict: This audiobook includes plenty of historical detail, and both mystery readers and fans of historical fiction will find it of interest.” —Library Journal (audio review)
An interesting and unique series…[Harris] displays her complete historical knowledge with her easy and graceful presentation of the times. In this fifth installment, the personal stakes have never been higher…The twists and turns never stop, making Shadow of the Raven impossible to put down.” —RT Book Reviews (4½ stars, Top Pick!)

Tessa Harris, an English author born in Lincolnshire, holds a history degree from Oxford University. After four years of working with local newspapers, she set her sights on women’s magazines. She is regularly heard on local BBC radio and over the years has interviewed such people as Margaret Thatcher, Jeffrey Archer, Anthony Hopkins, Susan Hampshire, Alan Titchmarsh, Jackie Stewart, Boris Johnson, and Uri Geller.

Simon Vance (a.k.a. Robert Whitfield) is an award-winning actor and narrator. He has earned more than fifty Earphones Awards and won the prestigious Audie Award for best narration thirteen times. He was named Booklist’s very first Voice of Choice in 2008 and has been named an AudioFile Golden Voice as well as an AudioFile Best Voice of 2009. He has narrated more than eight hundred audiobooks over almost thirty years, beginning when he was a radio newsreader for the BBC in London. He is also an actor who has appeared on both stage and television.