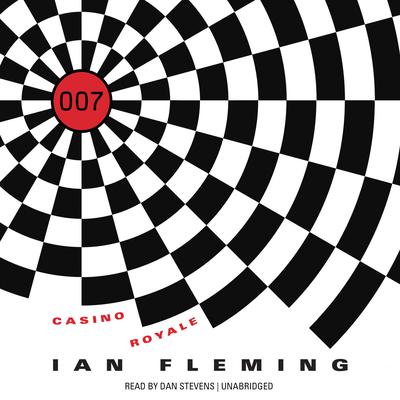 For James Bond and the British Secret Service, the stakes couldn't be higher. 007's mission is to neutralize the Russian operative Le Chiffre by ruining him at the baccarat table, forcing his Soviet masters to "retire" him. When Le Chiffre hits a losing streak, Bond discovers his luck is in—that is, until he meets Vesper Lynd, a glamorous agent who might yet prove to be his downfall.

This audiobook includes an exclusive bonus interview with Dan Stevens.

“Bond is what every man would like to be and what every woman would like to have between her sheets.” —Raymond Chandler
“From the first evocative words to the last savagely ironic sentence. this is a novel with its own flavor.” —Sunday Times
“Mr. Fleming has produced a book that is both exciting and extremely civilized.” —Times Literary Supplement
“Narrator Dan Stevens, of Downton Abbey fame, perfectly captures the joie de vivre of Bond and, even more important, his humanity. While images of Sean Connery are inescapable, Stevens creates his own version of the secret agent…And what Bond book would be complete without a woman? The femme fatale in this work is one of the more fully realized women in the Bond series and has surprises of her own.” —AudioFile
“An intense, fascinating, and moody piece of fiction.” —Raymond Benson, author of High Time to Kill

Ian Fleming was born in London in 1908. He was educated at Eton and worked as a journalist in Moscow and a banker and stockbroker in London before becoming personal assistant to the Director of Naval Intelligence during the Second World War. He wrote his first Bond novel, Casino Royale, at Goldeneye, his home in Jamaica, in 1952. Since then James Bond has gone on to become a global phenomenon.