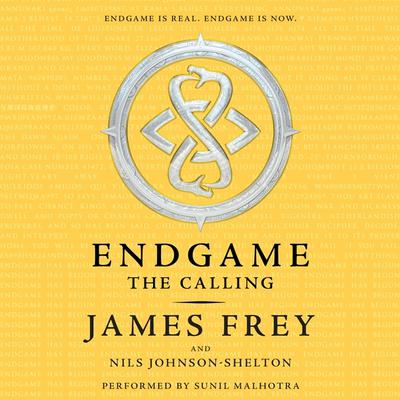 By James Frey and Nils Johnson-Shelton
Read by Sunil Malhotra

In each generation, for thousands of years, twelve Players have been ready. But they never thought Endgame would happen. Until now.

Omaha, Nebraska. Sarah Alopay stands at her graduation ceremony—class valedictorian, star athlete, a full life on the horizon. But when a meteor strikes the school, she survives. Because she is the Cahokian Player. Endgame has begun.

Juliaca, Peru. At the same moment, thousands of miles away, another meteor strikes. But Jago Tlaloc is safe. He has a secret, and his secret makes him brave. Strong. Certain. He is the Olmec Player. He's ready. Ready for Endgame.

Across the globe, twelve meteors slam into Earth. Cities burn. But Sarah and Jago and the ten others Players know the truth. The meteors carry a message. The Players have been summoned to The Calling. And now they must fight one another in order to survive. All but one will fail. But that one will save the world. This is Endgame.

“Twelve young people between the ages of thirteen and nineteen, each representing ‘the original lines of humanity,’ are fighting to win Endgame and secure the survival of their particular segment of the population…The third-person narratives from the Players are clearly labeled with characters’ names and locations, making the intricately plotted action easy to follow, and readers will easily be caught by the authors’ gripping, often gory descriptions of young people confronting the fight for which they’ve trained all their lives.” —Booklist

James Frey is the author of A Million Little Pieces and the #1 New York Times bestseller My Friend Leonard. Originally from Cleveland, he was educated at Denison University and the School of the Art Institute of Chicago.

Nils Johnson-Shelton is the author of the international bestseller No Angel: My Harrowing Undercover Journey to the Inner Circle of the Hells Angels. He is also the author of the Full Fathom Five series for tweens, Otherworld Chronicles. He lives in Brooklyn with his family.