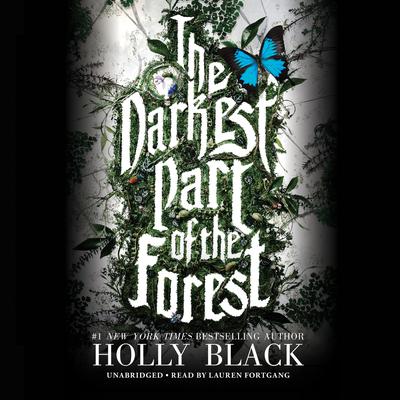 The Darkest Part of the Forest

A girl makes a secret sacrifice to the faerie king in this lush fantasy from New York Times bestselling author Holly Black.

Children can have a cruel, absolute sense of justice. Children can kill a monster and feel quite proud of themselves. A girl can look at her brother and believe they're destined to be a knight and a bard who battle evil. She can believe she's found the thing she's been made for.

Hazel lives with her brother, Ben, in the strange town of Fairfold where humans and fae exist side by side. The faeries' seemingly harmless magic attracts tourists, but Hazel knows how dangerous they can be, and she knows how to stop them. Or she did, once.

At the center of it all, there is a glass coffin in the woods. It rests right on the ground and in it sleeps a boy with horns on his head and ears as pointy as knives. Hazel and Ben were both in love with him as children. The boy has slept there for generations, never waking.

Until one day, he does …

As the world turns upside down and a hero is needed to save them all, Hazel tries to remember her years spent pretending to be a knight. But swept up in new love, shifting loyalties, and the fresh sting of betrayal, will it be enough?

“Close in tone to some of Charles de Lint’s work, it’s an enjoyable read with well-developed characters and genuine chills.” —Publishers Weekly
“Hazel and Ben will have to confront long-buried secrets if they want their town to survive. Once again, Black examines the intersection between self-reliance and guilt…Action scenes pepper the story…[along with] the author’s detailed world-building…While not Black’s best, it is still better than most teen fantasy.” —School Library Journal
“Expertly weaving fairy-tale magic into a contemporary setting, Black slowly reveals Hazel’s mysterious involvement with the fairy court and her heroic role in setting the prince free. Though there’s enough backstory that this dark fantasy occasionally feels like a sequel, Black’s stark, eerie tone, propulsive pacing, and fulsome world building will certainly delight her legion of fans.” —Booklist
“Black returns to her faerie roots with a fantasy set in our very recognizable modern world…Black clearly knows her lore, and the broad strokes intrigue…In the end, Black’s latest seems to mirror Hazel’s fears about herself—‘as normal and average as any child ever born’—but like Hazel, it’s not without charm.” —Kirkus Reviews
“Narrator Lauren Fortgang recounts, with equal parts whimsy and solemnity, the lore of Fairfold, a modern-day town where humans and fairies coexist…Fortgang shifts effortlessly between Hazel’s vulnerability and sarcasm but is at her best when voicing the fair folk. A sense of delight and terror is palpable and will keep listeners’ attention through the action-packed climax.” —AudioFile
“Unflinchingly mesmerizing, Holly Black’s The Darkest Part of the Forest is rich and vibrant. Black’s writing is magic in every way, and she remains in a class all her own as she weaves faerie lore and enigmatic characters into an engrossing story.” —RT Book Reviews (4½ stars, Top Pick!)