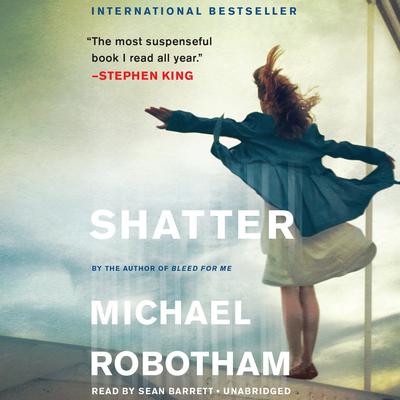 Winner of the Ned Kelly Award for Best Novel

In this fast-paced thriller, a psychologist faces off against a killer who destroys his victims from the inside out.

Joe O'Loughlin is in familiar territory—standing on a bridge high above a flooded gorge, trying to stop a distraught woman from jumping. "You don't understand," she whispers, and lets go. Joe is haunted by his failure to save the woman, until her teenage daughter finds him and reveals that her mother would never have committed suicide—not like that. She was terrified of heights.

What could have driven her to commit such a desperate act? Whose voice? What evil?

Having devoted his career to repairing damaged minds, Joe must now confront an adversary who tears them apart. With pitch-perfect dialogue, believable characters, and astonishingly unpredictable plot twists, Shatter is guaranteed to keep even the most avid thriller readers riveted long into the night.

The most suspenseful book I read all year. —Stephen King, Entertainment Weekly
Pleasantly creepy....plotted with precision and narrated with real intelligence. —The New York Times Book Review
“The most suspenseful book I read all year.” —Stephen King
“Terrific….a classic ‘wrong man’ thriller that puts its hero in hot water, then raises the Fahrenheit to a fever pitch….Robotham not only builds the suspense masterfully but tops it off with a stunning twist.” —People
“This is Robotham’s…best psychological thriller.” —Daily Mirror (London)
“Shatter is psychological suspense at its finest.” —Chicago Sun-Times
“Shatter will have you turning the pages compulsively, desperate to get to the end but not daring to miss a word.” —Times (London)
“Thematically complex, artfully structured, beautifully written and observed, Shatter confirms Robotham’s place in the front row of crime.” —Sydney Morning Herald
“Brace yourself. Shatter is a nerve-shredding cat-and-mouse contest…The story is told in alternating first-person accounts, and Sean Barrett wisely voices healer and murderer almost identically, making the point that they have much in common except that one of them uses his skills to torture and kill. When for a moment you’re not sure who is speaking, it’s thrillingly creepy. Barrett creates a wide range of wives, children, crusty cops, and panic-stricken victims with perfect control, and his pacing is propulsive. This is one you won’t forget. Winner of the AudioFile Earphones Award.” —AudioFile
“Robotham smoothly mixes Joe’s investigation and personal struggles with glimpses into the killer’s mind. Even the sharpest readers may not anticipate all of the plot’s agile switchbacks or foresee the chilling climax.” —Publishers Weekly
“Rebuffed by the police, Joe calls in his old friend, retired policeman Vincent Ruiz…and together they start a harrowing investigation. Robotham once again delivers. Recommended for all public libraries.” —Library Journal
“Robotham sharpens the conventional horrors with his unerring eye for psychological detail, his mastery of pace, and his spooky villain, a manipulator as monstrous as Hannibal Lecter.” —Kirkus Reviews