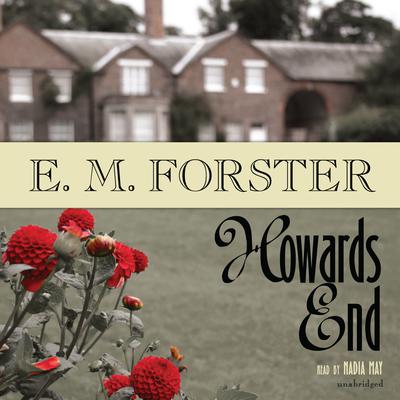 By E. M. Forster
Read by Nadia May

In this vibrant portrait of Edwardian England and the many intricacies of class relations in English society during the turn of the century, two families with conflicting values are brought together by an inheritance dispute over a charming country house called Howards End. Sisters Margaret and Helen Schlegel and their brother Tibby place their values in civilized culture, music, literature, and conversation with their friends. Henry Wilcox and his children, Charles, Paul, and Evie, are concerned with the business side of life and distrust emotions and imagination. Through a series of romantic entanglements, disappearing wills, and sudden tragedy, the conflict over the house emerges as a symbolic struggle for England's very future.

Regarded by many as Forster's masterpiece, Howards End concerns the nature of class and social status and how they affect one's relationships and well-being—for better or for worse.

“Nadia May’s diction is fine, and she uses some differentiation between characters.” —AudioFile
“Nadia May’s reading of Howards End appropriately focuses attention on the book’s cast of female characters and Forster’s feminist beliefs. May is as skillful in differentiating among these women as she respectful of their strengths and intelligence. Add May’s English accent, flawless pacing, and obvious fondness for the text and the result is a thoughtful and rewarding experience.”  —Library Journal
“Howards End is undoubtedly Forster’s masterpiece; it develops to their full the themes and attitudes of [his] early books and throws back upon them a new and enhancing light.” —Lionel Trilling, American literary critic
“Howards End is a classic English novel…superb and wholly cherishable…one that admirers have no trouble reading over and over again.” —Alfred Kazin, American literary critic

Edward Morgan Forster (1879–1970) was born in London and raised by his mother and paternal aunts. He pursued his interests in philosophy and classics at Cambridge and there began his writing. He wrote six novels, short stories, essays, and other nonfiction. He is known for his liberal humanism, notably exemplified in his greatest novel, A Passage to India.