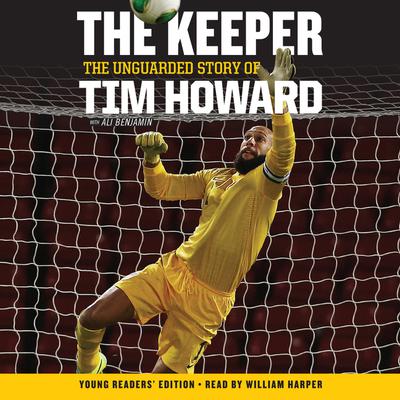 By Tim Howard , with Ali Benjamin
Read by William Harper

In this heartwarming and candid account, Tim Howard opens up about how a hyperactive kid from New Jersey with Tourette Syndrome defied the odds to become one of the world's premier goalkeepers.

Tim shares his remarkable journey in an accessible way that will speak to soccer fans, kids struggling with issues that make them feel "different," and any young person looking for a compelling autobiography to read for a report or just for fun.

After a successful seventeen-year professional soccer career, Tim became an overnight star during the 2014 World Cup in Brazil. His heroic performance in the game for the United States against Belgium, in which he saved an astonishing fifteen shots—the most for any goalkeeper in a World Cup game—made him a household name as well as a trending internet meme.

In the course of 120 minutes, Tim went from a player known mainly by soccer fans to an American icon, loved by millions for his dependability, daring, and humility.

Tim Howard is the goalkeeper for the English Premier League club Everton and the United States Men’s National Team. In July 2014, Howard broke the record for the most saves in a World Cup game against Belgium. He also works for NBC Sports as a commentator for the network’s English Premier League coverage. He splits his time between Liverpool, England, and Tennessee.