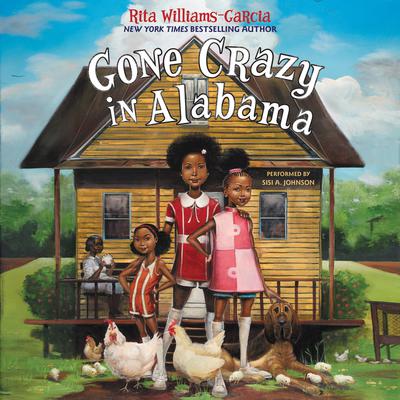 By Rita Williams-Garcia
Read by Sisi A. Johnson

An ALA Notable Children’s Book of 2016

The Coretta Scott King Award–winning Gone Crazy in Alabama by Newbery Honor and New York Times bestselling author Rita Williams-Garcia tells the story of the Gaither sisters as they travel from the streets of Brooklyn to the rural South for the summer of a lifetime.

Delphine, Vonetta, and Fern are off to Alabama to visit their grandmother Big Ma and her mother, Ma Charles. Across the way lives Ma Charles’s half sister, Miss Trotter. The two half sisters haven’t spoken in years. As Delphine hears about her family history, she uncovers the surprising truth that’s been keeping the sisters apart. But when tragedy strikes, Delphine discovers that the bonds of family run deeper than she ever knew possible.

Powerful and humorous, this companion to the award-winning One Crazy Summer and P.S. Be Eleven will be enjoyed by fans of the first two books, as well as by readers meeting these memorable sisters for the first time.

Readers who enjoy Christopher Paul Curtis's The Watsons Go to Birmingham and Jacqueline Woodson’s Brown Girl Dreaming will find much to love in this book. Rita Williams-Garcia's books about Delphine, Vonetta, and Fern can also be read alongside nonfiction explorations of American history such as Jason Reynolds's and Ibram X. Kendi's books.

Each humorous, unforgettable story in this trilogy follows the sisters as they grow up during one of the most tumultuous eras in recent American history, the 1960s. Read the adventures of eleven-year-old Delphine and her younger sisters, Vonetta and Fern, as they visit their kin all over the rapidly changing nation—and as they discover that the bonds of family, and their own strength, run deeper than they ever knew possible.

“The Gaither sisters are an irresistible trio. Williams-Garcia excels at conveying defining moments of American society from their point of view.” —Publishers Weekly (starred review)

“The back-and-forth allows Williams-Garcia to unspool the Gaithers’ complex family history: as slaves, as blacks in the segregated south, and in relation to the Native Americans who once called the area home…It’s reward enough just to spend more time with this feisty, close-knit family, whose loyalty to and love for each other trump everything else.” —Publishers Weekly (starred review)
“This final installment is rich in atmosphere and clearly conveys the sisters’ distinct personalities, their loyalty to one another, and their special place in their complex family…A must-have conclusion to this beloved middle grade series.” —Library Journal (starred review)
“Narrator Delphine, almost thirteen, still feels the responsibility of being the oldest…Her narrator’s voice continues to be strong and true. Here we see where she gets it: from a great-grandmother and great-aunt who sit on their porches and tell stories that patch together triumphs, heartaches, and family history, and from Cecile, one of the most unique mothers in children’s literature, who is tied to her own truth and tells it, whatever the consequences.” —Booklist (starred review)
“This well-crafted depiction of a close-knit community in rural Alabama works beautifully, with language that captures its humor, sorrow, and resilience. Rich in all areas, Delphine and her sisters’ third outing will fully satisfy the many fans of their first two.” —Kirkus Reviews (starred review)
“Williams-Garcia’s novel has the feeling of a saga, an American story of several generations, related effectively from Delphine’s first-person point of view—and with help from some feisty elders.” —Horn Book
“Narrator Sisi Johnson masterfully distinguishes between the voices of sisters Delphine, Vonetta, and Fern and gives a unique voice to each member of their extended family…Johnson switches seamlessly between four generations, modifying her voice slightly for each family member…In particular, fans of the first two books will continue to enjoy the sassiness and warmth in the voice of Delphine, from whose point of view the story is told.” —AudioFile

Rita Williams-Garcia is the author of the Newbery Honor–winning novel One Crazy Summer, which was also a winner of the Coretta Scott King Award, a National Book Award finalist, and winner of the Scott O’Dell Award for Historical Fiction. She is also the author of six distinguished novels for young adults: Jumped, a National Book Award finalist; No Laughter Here; Every Time a Rainbow Dies (a Publishers Weekly Best Children’s Book); Fast Talk on a Slow Track (all ALA Best Books for Young Adults); Blue Tights; and Like Sisters on the Homefront, a Coretta Scott King Honor Book. She is on the faculty at the Vermont College of Fine Arts in the Writing for Children an Young Adults program.