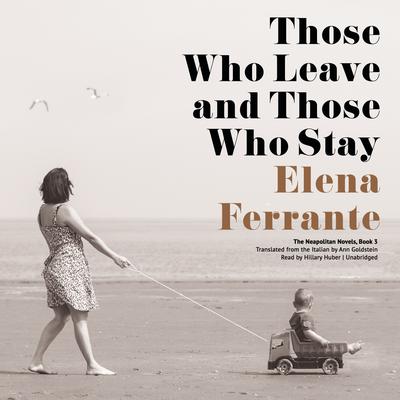 Those Who Leave and Those Who Stay

In the third book in the New York Times bestselling Neapolitan quartet that inspired the HBO series My Brilliant Friend, Elena and Lila have grown into womanhood.

Lila married at sixteen and has a young son; she has left her husband and the comforts her marriage brought and now works as a common laborer. Elena has left the neighborhood, earned her college degree, and published a successful novel, all of which has opened the doors to a world of learned interlocutors and richly furnished salons.

Both women are pushing against the walls of a prison that would have seen them living a life of misery, ignorance, and submission. They are afloat on the great sea of opportunities that opened up for women during the 1970s. And yet, they are still very much bound to each other in a book that “shows off Ferrante’s strong storytelling ability and will leave readers eager for the final volume of the series” (Library Journal).

“Ferrante writes with the kind of power saved for weather systems with female names, sparing no one, and Those Who Stay is a tour de force. I don’t want to read anything else.” —Jennifer Gilmore, New York Times bestselling author of Golden Country
“Elena Ferrante is one of the great novelists of our time.” —New York Times Book Review
“Surpass[es] the rapturous storytelling of the previous titles in the Neapolitan Novels.” —Publishers Weekly (starred review)
“Rising far above the melodrama of a typical coming-of-age story, this third in Ferrante’s four Neapolitan novels exhibits keen intellectual curiosity and heartfelt passion as it continues to explore the lives of childhood friends Lina and Elena…Superbly translated, this tour de force shows off Ferrante’s strong storytelling ability and will leave readers eager for the final volume of the series.” —Library Journal (starred review)
“Ferrante continues to imbue this growing saga with great magic, treating the girls’ years of marriage and motherhood with breathtaking honesty while envisaging the turbulence of political and social unrest in 1970s Italy. Though originally planned as a trilogy, the story doesn’t finish here, as this book ends with a hook that will leave readers eagerly awaiting the next installment.” —Booklist (starred review)
“Ferrante’s lucid rendering of Lila’s and Elena’s entwined yet discrete lives illustrates both that the personal is political and that novels of ideas can compel as much as their lighter-weight counterparts.” —Kirkus Reviews (starred review)
“Ferrante has authored a ‘Portrait of the Artist as a Young Woman’ that captures not only the forging of a self but the salvaging of it.” —Vogue, praise for the series

Elena Ferrante, author of The Days of Abandonment, Troubling Love, and My Brilliant Friend, among others, is one of Italy’s most important and acclaimed contemporary writers. She was named one of the 100 Most Influential People of 2016 by Time.