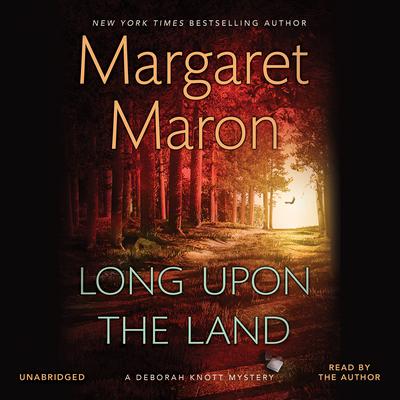 Long upon the Land

Winner of the 2015 Agatha Award for Best Contemporary Novel

A multiple award winner of the most prestigious prizes for mystery fiction, Margaret Maron is back with a new mystery featuring her critically acclaimed sleuth Judge Deborah Knott.

No one in Judge Deborah Knott’s family knows the meaning of the inscription on their late mother’s cigarette lighter, which young Susan Stephenson acquired near the end of World War II. Whose initials are “W.R.M.” and why is it engraved with “Happy 25th – Leslie”? Meanwhile, Kezzie Knott has discovered the body of a man who used to make whiskey for him back when he was running white lightning. What was he doing on Kezzie’s land, and why was he bludgeoned on the head three separate times? While her husband, Sheriff’s Deputy Dwight Bryant, investigates, Deborah meets a woman who could help her identify the lighter’s original owner. For years Deborah has wondered how the daughter of a wealthy attorney could have married a widowed, semi-illiterate bootlegger, and this time she’s determined to find the answer.

“Bestseller Maron’s twentieth Deborah Knott mystery combines strong plotting, a superb cast of recurring characters, and a rare sense of place that transports readers to rural North Carolina…adds up to another sparkling chapter of the Knott family saga.” —Publishers Weekly (starred review)
“Sprinkled with the low-country vernacular and the wonderful characters of Colleton County, NC, this title is a worthy addition to Maron’s series. Readers of Southern mysteries will find much to adore.” —Library Journal
“Maron proves as adept as ever at melding a central mystery with an involving family story…Maron emphasizes the close relationships of Deborah’s extended family and the way their rural lifestyle connects them to the land, which makes for an especially heartwarming read.” —Booklist

Margaret Maron is the author of more than twenty-five novels and two collections of short stories. Winner of several major American awards for mysteries, including the Edgar, Agatha, Anthony, and Macavity, her works are on the reading lists of various courses in contemporary Southern literature. A native Tar Heel, she still lives on her family’s country farm a few miles from Raleigh.