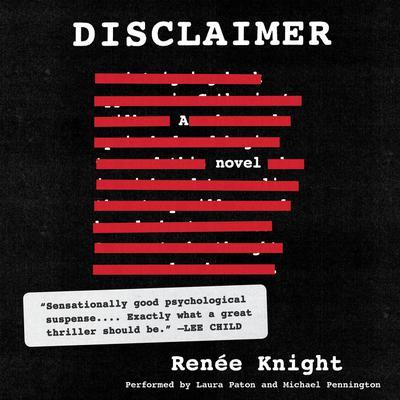 By Renée Knight
Read by Laura Paton and Michael Pennington

A New York Times Pick of Best Summer Reads of 2015

A brilliantly conceived, deeply unsettling psychological thriller— already an international sensation—about a woman haunted by secrets, the consuming desire for revenge, and the terrible price we pay when we try to hide the truth.

Finding a mysterious novel at her bedside plunges documentary filmmaker Catherine Ravenscroft into a living nightmare. Though ostensibly fiction, The Perfect Stranger recreates in vivid, unmistakable detail the terrible day she became hostage to a dark secret, a secret that only one other person knew—and that person is dead.

Now that the past is catching up with her, Catherine’s world is falling apart. Her only hope is to confront what really happened on that awful day . . . even if the shocking truth might destroy her.

“Sensationally good psychological suspense…Exactly what a great thriller should be.” —Lee Child, #1 New York Times bestselling author
“Stealthily steals your attention and by the end holds you prisoner—a searing story that resonates long after the final page.” —Rosamund Lupton, New York Times bestselling author
“An addictive novel.” —Sunday Times (London)
“Lives up to its unusually gripping premise…as the best of domestic noir.” —New York Daily News
“A seriously unnerving roller coaster…It’s also a surprisingly sophisticated examination of marriage, motherhood, and memory, as well as—naturally—guilt, grief, and revenge.” —Richmond Times-Dispatch
“A mysterious book within a book…This unsettling psychological thriller about guilt and grief briskly moves to a shocking finale enhanced by its strong characters.” —Publishers Weekly (starred review)
“This debut British psychological thriller engages the reader from page one; mystery aficionados will dash to finish it in one sitting. Deliciously captivating, brilliantly twisty, and enticingly addictive, it hits the trifecta for a strong thriller!” —Library Journal (starred review)
“Knight plays with our allegiances in this juicy domestic noir.” —BookPage
“This is a good psychological thriller…with lots of family drama.” —Booklist
“A page-turner. An addictive psychological thriller.” —Kirkus Reviews
“Knight’s deeply disturbing psychological thriller is expertly narrated by Michael Pennington and Laura Paton. Both narrators, particularly Pennington, begin with understated performances that…soon ramp up in a way that matches the story itself as layers upon layers of complexity and deception are revealed…Listeners will regret anything that takes them away from the story.” —AudioFile
“A terrific novel with a brilliantly creepy central premise.” —Paula Daly, author of What Kind of Mother Are You?

Renée Knight worked for the BBC directing arts documentaries before turning to writing. She has had television and film scripts commissioned by the BBC, Channel Four, and Capital Films. She is a graduate of the Faber Academy “Writing a Novel” course, whose alumni include S. J. Watson.