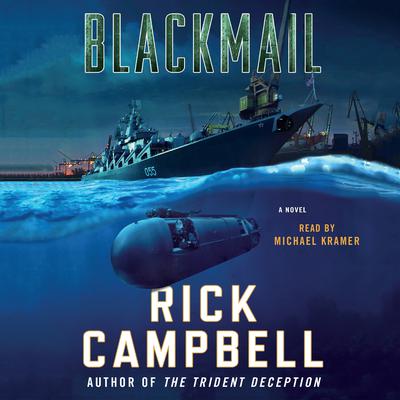 "As in Tom Clancy's technothrillers, the war maneuvers feel authentic and are described in stellar detail." —Booklist on Blackmail

In Rick Campbell's new thriller Blackmail, a bold military and political strike by the Russian government leaves the U.S. reeling, crippled and vulnerable, with only a desperate long shot chance to avoid a devastating world war.

The U.S. aircraft carrier patrolling the Western Pacific Ocean is severely damaged by a surprise salvo of cruise missiles. While the Russian government officially apologizes, claiming it was the result of fire control accident during a training exercise, it was instead a calculated provocation. With the U.S. Pacific fleet already severely under strength, the Russian President decides that the US response is a clear indication of their weakness, militarily and politically, and initiates a bold plan.

Political unrest is spreading through the Eastern European states. The Russian Northern Fleet moves swiftly in the Mediterranean Sea, the Russian army is moving west to the border, and Russian Baltic and Black Sea Fleets are mobilized. In one bold strike, the Russian army moves to reoccupy a large number of the industrialized areas of the former USSR, while blockading the vital sea passages through which the world’s oil and natural gas transit. To make matters worse, Russia’s Special Forces have wired every major oil and natural gas pipeline with explosives. If the U.S. makes one move to thwart Russia, they’ll destroy them all. The U.S. is risking disaster if it acts, but the alternative is quite possibly worse. Torn between the unthinkable and the impossible, the only possible move—to launch an attack on all fronts, simultaneously.

Rick Campbell, a retired Navy commander, spent more than twenty-five years on multiple submarine tours, finishing his career with the Naval Operations staff in the Pentagon and in the Washington Navy Yard. On his last tour, he was one of the two men whose permission was required to launch the submarine’s nuclear-tipped missiles. He is the author of several military thrillers, including Blackmail, The Trident Deception, Empire Rising, and Ice Station Nautilus.