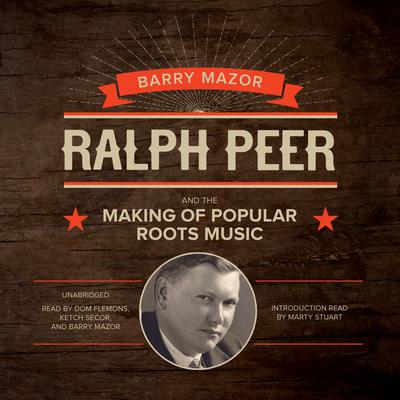 Ralph Peer and the Making of Popular Roots Music

This is the first biography of Ralph Peer, the adventurous—even revolutionary—A&R man and music publisher who saw the universal power locked in regional roots music and tapped it, changing the breadth and flavor of popular music around the world. It is the story of the life and fifty-year career, from the age of cylinder recordings to the stereo era, of the man who pioneered the recording, marketing, and publishing of blues, jazz, country, gospel, and Latin music.

The book tracks Peer’s role in such breakthrough events as the recording of Mamie Smith’s “Crazy Blues” (the record that sparked the blues craze), the first country recording sessions with Fiddlin’ John Carson, his discovery of Jimmie Rodgers and the Carter Family at the famed Bristol sessions, the popularizing of Latin American music during World War II, and the postwar transformation of music on the airwaves that set the stage for the dominance of R&B, country, and rock ’n’ roll.

But this is also the story of a man from humble Midwestern beginnings who went on to build the world’s largest independent music publishing firm, fostering the global reach of music that had previously been specialized, localized, and marginalized. Ralph Peer redefined the ways promising songs and performers were identified, encouraged, and promoted; rethought how far regional music might travel; and changed our very notions of what pop music can be.

“Mazor discusses the evolution of American music and intricacies of music publishing with equal authority…He tells this complex, intertwined story with ample substance for serious scholars while also making his book welcoming and accessible for neophytes.” —Wall Street Journal
“A beautifully written portrait of an utterly fascinating man. One is continually astonished at how a shipping clerk from Independence, Missouri, at various junctions in his life, made decisions that transformed American music by bringing new artists and forms of music—from country, blues, and bluegrass to early rock ’n’ roll—to millions of citizens who had not yet encountered them.” —New York Times
“Mazor’s book rolls along at a swift and radio-friendly tempo, supplying invaluable detail on Peer’s achievements and the vision that drove them.” —Paste magazine
“Peer finally receives his due in this excellent biography.” —Booklist
“The music executive’s own thoughts about his life are part of Mazor’s meticulous account of Peer’s life and legacy…Listeners who are curious will find this worth hearing.” —AudioFile
“This is an overwhelming book about an overwhelming character in the music field…We owe Barry Mazor a debt of gratitude for telling Peer’s incredible life story.” —Bob Dylan, American singer and songwriter
“Ralph Peer was there first to discover and record roots music before anyone else. This remarkable man brought that legacy to the world, nurturing the early country, blues, jazz, and Latin artists. It’s all in this book. Dive in and be awed.” —Donovan, musician
“The world has been waiting for this! Ralph Peer is surely the most fascinating character in American vernacular music business history…Mazor does a spectacular job weaving together the threads of Peer’s discoveries in blues, jazz, country, and Latin. You will be amazed! I can’t recommend this book strongly enough.” —Ry Cooder, musician and composer
“Ralph Peer’s true importance in American music is rarely understood outside of the music business, but Barry Mazor’s book draws a compelling portrait of Peer as business innovator, music scout, and publishing executive, detailing his visionary pursuit of musical riches in previously unexplored rural America and Latin America—yielding a body of recorded blues, country, and pop that are the foundations of American musical culture.” —Laura Cantrell, country music singer and songwriter

Barry Mazor is a longtime music, media, and business journalist. He is a regular contributor to the Wall Street Journal and to the online music magazine Cuepoint, and he is the author of Meeting Jimmie Rodgers and Connie Smith: Just for What I Am. He is the former senior editor and columnist for No Depression magazine, and his work has appeared in numerous publications, including American Songwriter, the Nashville Scene, the Village Voice, and the Washington Post. He was awarded the Charlie Lamb Award for Excellence in Country Music Journalism in 2008.