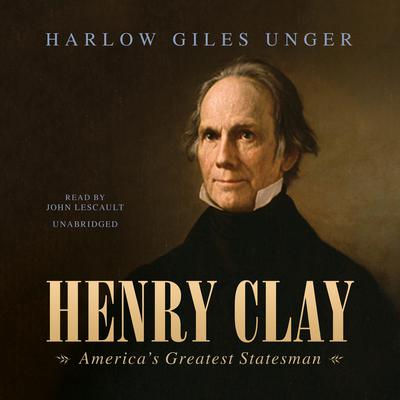 A compelling new biography of America’s most powerful Speaker of the House, who held the divided nation together for three decades and who was Lincoln’s guiding light

In a little known chapter of early American history, a fearless Kentucky lawyer rids Congress of corruption and violence in an era when congressmen debated with bullets as well as ballots. Harlow Giles Unger reveals how Henry Clay, the youngest congressman ever elected Speaker of the House, rewrote congressional rules and established the Speaker as the most powerful elected official after the president.

During five decades of public service—as congressman, senator, secretary of state, and four-time presidential candidate—Clay produced historic compromises that postponed civil war for fifty years. Lincoln called Clay “the man for whom I fought all my life.”

An action-packed narrative history, Henry Clay is the story of one of the most courageous congressmen in American history.

“A comprehensive biography of the statesman whom Abraham Lincoln called ‘the ideal politician’…In this lucid, exemplary biography, Unger focuses on not just Clay, but also on the formation of the early republic, a time too little studied today. An excellent introduction to a turbulent era.” —Kirkus Reviews (starred review)
“In this nimble portrayal of ‘the first true American leader,’ prolific biographer Unger depicts Clay as a consummate politician and a champion of the union…Unger’s political biography layers a veneer of stability over a tumultuous and divisive time in American history.” —Publishers Weekly
“A competent accounting of Clay’s arc, Unger’s work deserves a slot in the history collection.” —Booklist